Dennis Itumbi Broke The News of Mandela’s Death 20 Minutes Before Jacob Zuma, CNN & BBC… Here are The Insults He Received

Apart from Robert Alai, the other controversial figure in Kenya’s social media scene is ‘Government Blogger’ Dennis Itumbi.
The two have rubbed a few shoulders the wrong way, but the latter has toned down since landing that big State House job.

Just like Alai, Itumbi is known for breaking news before news outlets. However, until last week, this had been confined to the borders of Kenya.

I do not know his sources, but Itumbi somehow broke the news of Mandela’s death before South African President Jacob Zuma, major news outlets, minor news outlets, and most probably his was one of the first RIP Mandela messages in the world on that fateful day.

Those who replied to his tweet and Facebook post attacked him for ‘killing’ the icon. Others wondered how a ‘government spokesman’ can be peddling unconfirmed reports, especially to the magnitude of Mandela’s death.
Others even said his account had been hacked. 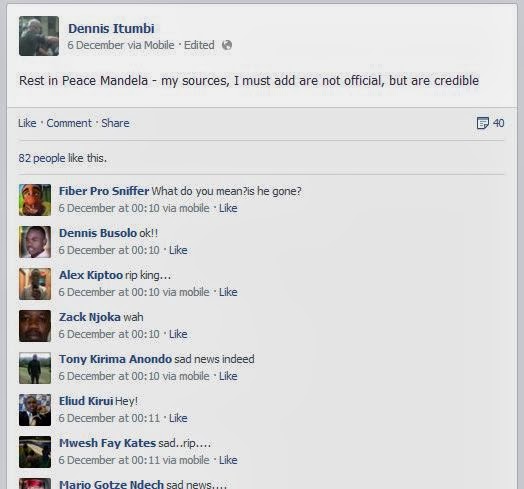 Rest in Peace Mandela – my sources, I must add are not official, but are credible

And some of the comments that followed:

Are u kidding Dennis Itumbi? Because Australia is morning now and no news yet????u sure???

can’t see such a story on any major world news channel, what are your sources???

Do you have factual info Itumbi ama ni Jubilee hearsy?

this is just one of the common flukes

Which Mandela?? you know there is so many of them. can’t see anything anywhere even social media.

i havent seen it on any major media.. till then i wont believe
Itumbi stop killing Madiba! He is our hero.

The guy is fighting for his life…not dead!

Outrageous! If it’s not in CNN it’s not true!

He is not dead Dennis Itumbi. Not yet. Check your sources again

Dennis Itumbi, be responsible in your utterances, you are in a high office my friend

Am in capetown people r parting no sign of mourning

30 minutes later, Jacob Zuma, BBC, CNN and Reuters confirmed. Some of those who had abused Itumbi deleted their comments while others could not stop singing his praise..

Itumbi u r a genious.how the hell did u know.i thnk in kenya you were the first to know

For a moment there I doubted you..

Itumbi knew this way earlier than us…n had time to confirm and a window of about 45 mins prior to our official confirmation!!.

Aki I have respected those sources of yours. U were the first to announce in Kenya. RIP Madiba.

wah bro u hav now proven ur self u are always ahead of us ….good work its now confirmed. ……

Dennis you are dangerous. I’mofficially afraid of you …..whoa!!

Dennis wen u put this up, no any other media in the whole world had it up, hadi south African media..u made me postpone sleep knowing mayb it will pop up anytime..then within second just typed nelson mandela n each n every media on earth was finally on his departue!

And this was the initial tweet by Itumbi, which was equally followed by strong reactions from Kenyans.