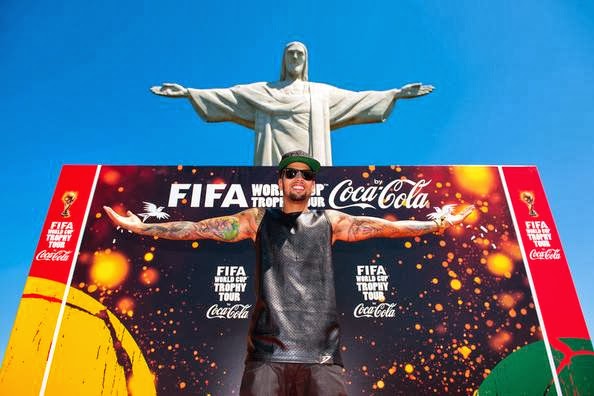 Brazil 2014 FIFA World Cup is one of the most awaited events in our calendars and with it comes the catchy anthems we all find ourselves singing.
The man behind this year’s Coca Cola anthem is former X-Factor finalist David Correy. He was scheduled to jet in the country last night, a few hours before the trophy arrives in the country.

The Brazilian singer, will perform the anthem titled “The World is Ours” at the presidential reception at Coca-Cola offices on Wednesday 27th, as well as the consumer viewing event at KICC on Thursday 28th.

David Correy has been a source of inspiration for many people largely due to his humble upbringing.
He was born in Brazil but was adopted at a young age in Maryland, USA. He only reunited with his birth mother as a grown up, actually while at X-Factor.

Shakira’s Waka Waka was however the official Fifa Anthem.

Lions Hold Family Hostage For 4 Hours at The Maasai Mara < Previous
PHOTO – 1963 Letter By Coca Cola Congratulating Kenyans For Achieving Independence Next >
Recommended stories you may like: