‘Too Fat To Fly’ Man To Take Ferry To France 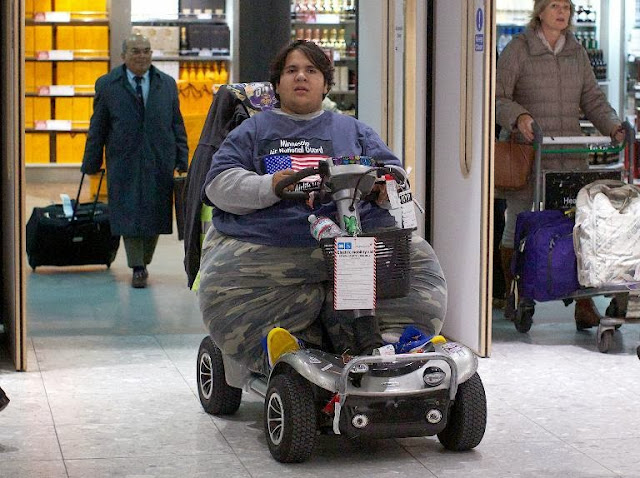 A clinically obese Frenchman who was stranded in the United States after undergoing medical treatment there was taken by ambulance to the British ferry port of Dover on Wednesday after being denied passage on the Eurostar due to safety concerns.
Kevin Chenais, 22, and his parents spent Tuesday night in a hotel near the Eurostar terminal at London’s St. Pancras station paid for by the train company, which said it had worked “ceaselessly to find an alternative solution”.
Chenais, who weighs 230 kilograms (500 pounds), has spent the past year and a half at the not-for-profit Mayo Clinic in the US state of Minnesota, receiving treatment for a severe hormone imbalance disorder. Incapacitated, he uses a mobility scooter and requires 24-hour oxygen therapy.
Chenais had initially been scheduled to return to France on a British Airways flight from Chicago almost a month ago, but was told by the airline that they couldn’t safely accommodate him, making headlines on both sides of the Atlantic.
After travelling from Chicago to New York with plans for boarding the Queen Mary 2, bound for Southampton, the Chenais family were left devastated when they were told by the cruise liner that due to “security reasons”, Kevin would not be admitted.
‘Discrimination’
“I was upset, disappointed, frustrated… I knew I couldn’t make it home,” Chenais told FRANCE 24.
For his father, René, there is no question about British Airways’ decision. “They discriminated against him,” he said. Chenais had flown to the United States with British Airways a year and a half ago, at which time he weighed a little more than he does now. The airline did not say why he had been allowed to travel at that time.
René Chenais told AFP that his son had been looking forward to travelling on the Queen Mary 2, and was “a little sad” to have missed out.
A wood-carving enthusiast, Chenais returns home with a trove of carvings he produced during his stay and a slight American accent when he speaks English.
‘A rare, rare problem’
Chenais’s mother Christina said that doctors had been unable to come up with a treatment for Kevin’s disorder during his time in the United States.
“He’s been from one hospital to the next… Finally we know is that it’s a rare, rare, problem that Kevin has,” she told FRANCE 24.
The family is considering suing BA for discrimination. But before that, they still need to get back to France.
(FRANCE 24 with AFP)
PHOTOS – Easy FM’s Munene Nyaga’s 8 Bedroom, 6 Bathroom Mansion < Previous
Gold Bar Worth $1.2 Million Found Hidden in Plane Toilet Next >
Recommended stories you may like:
OMG: KenGen Blames Monkey for Yesterday’s Nationwide Power Blackout
Wajir Town Orders All Donkeys To Wear Diapers
There’s a Tomato Emergency in Nigeria.. Prices Rise from Sh120 to Sh4000 in 3 Months After ‘Unkillable’ Moth Destroyed 80% of the Crop
DRC Minister Fired After He Was Caught Masturbating in Office