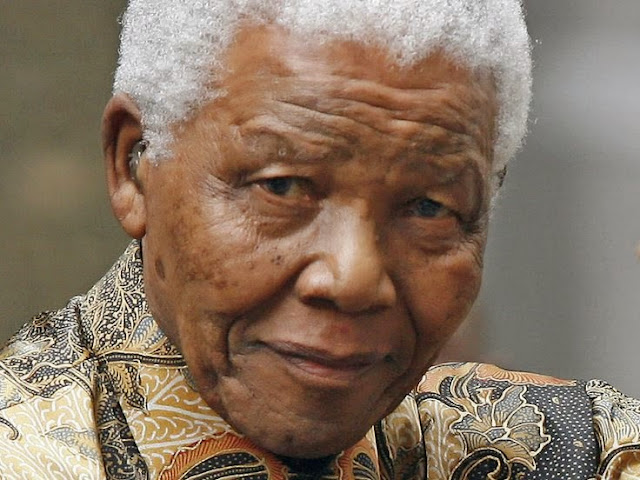 South Africa’s former president, Nelson Mandela, remains “quite ill” and unable to speak because of tubes that are keeping his lungs clear of fluid, though he is relaxed, his former wife told a South African newspaper.
“He remains very sensitive to any germs, so he has to be kept literally sterile. The bedroom there (in his suburban Johannesburg home) is like an ICU ward,” Winnie Madikizela-Mandela told the Sunday Independent. “He is 95 years old and it is difficult for him, because of all the tubes that are in his mouth to clear the (fluid from his) lungs, and prevent an infection recurring.” Because of those tubes, she said, he communicates through his face.
“But the doctors have told us they hope he will be able to recover his voice,” she said, adding that he is being treated by 22 doctors at his home.
Mandela’s former wife shot down reports that the former anti-apartheid leader and Nobel Peace prize winner was on life support.
“I have heard this nonsense that he is on life support. He is not,” she told the newspaper. When asked if he was peaceful, she said, “Very. When he is very relaxed, he is fine,” adding that it helps he is at his home, an environment that he recognizes.
Mandela has been in intensive medical care at his Johannesburg home since being discharged on Sept. 1 after nearly three months in a hospital for a recurring lung infection.
Madikizela-Mandela’s comments come days before the release of the film based on Mandela’s autobiography “Long Walk to Freedom” and which stars British actor Idris Elba. Madikizela-Mandela, 77, published a book of her prison diaries earlier this year entitled “491 Days: Prisoner number 1323/69.”
“Of course, I wish he could read the book, but I really wish he could see the film,” she said.
Madikizela-Mandela and Mandela divorced in 1996.
Mandela served a single five-year term as president of South Africa and afterward he focused on charitable causes, including the fight against HIV/AIDS. He withdrew from public life years ago. Mandela’s last public appearance was in 2010 at the World Cup soccer tournament, which was hosted by South Africa. At that time, bundled against the cold, he waved but did not speak to the stadium full of fans.
– AP
Poet Sentenced To 1 Year After Cheering For Westgate Attack < Previous
StarTimes Slashes Decoder Price Next >
Recommended stories you may like: