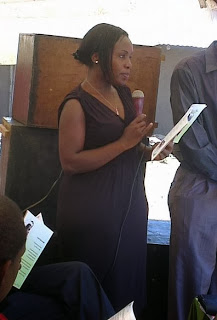 KTN news anchor Lindah Oguttu last night confirmed rumours that she is pregnant, in the unlikeliest of ways.

She was hosting the prime time news alongside Ben Kitili, and then it came to a pregnancy story.

“A lot of expectant women, like me… “she said, finally clearing the air.


The ‘hippy’ new anchor’s private life was just recently under scrutiny, after her fiancé, Dennis Mombo was accused of stealing up to 18 vehicles. The cars were found in his Mountain View Estate house compound, but it later turned out they were just security for his shylock business.

Basketmouth Celebrates His Wedding Anniversary In Kenya < Previous
Miguna Miguna: I Do NOT Have Cancer Next >
Recommended stories you may like: