Lebron James in Talks With Beckham on Co-owning MLS Team 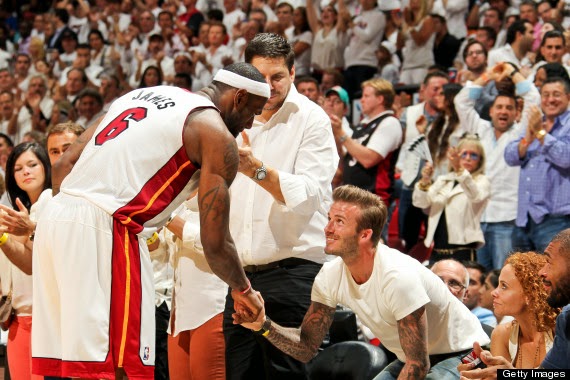 Basketball superstar LeBron James says he is in talks with David Beckham about investing in the former England captain’s planned Miami MLS franchise.
James, 28, won back-to-back NBA titles with Miami Heat and believes a football team would be popular in the city.
“David has become a good friend of mine. There’s interest on both sides” he told South Florida Sun-Sentinel.
The chance to become a team owner at a discounted price was part of Beckham’s contract at LA Galaxy.
The 38-year-old took up the option after ending his playing career at French side Paris St-Germain last season.
James already has a minority stake in Premier League Liverpool as part of a partnership with the club’s owners Fenway Sports Group.
“I think this is a great town for soccer,” James said of Beckham’s preferred base for his team.
“There’s a lot of soccer players, there’s great youth soccer players here and people love the city as well. That definitely would help.”
James added that he had learned more about football since becoming associated with Liverpool.
“I’ve grown to the point where I know exactly what’s going on when I’m watching the game,” he said.
– BBC Sports
HILARIOUS – All The Sauti Sol Gay Jokes and Memes < Previous
Parliamentary Committee Rejects Mututho’s Appointment Next >
Recommended stories you may like: