This is The Story of Wafula’s Wedding Night…. Hilarious 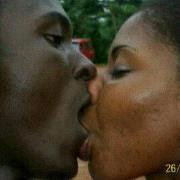 Wafula gets married and on his wedding night he calls his father for some tips on what to do ,since he has never been with a woman before..

WAFULA: dad what do i do first?”

FATHER: Take her clothes off and lay her on the bed…

*5 minutes later Wafula is on the phone again..*

WAFULA: She’s naked and in bed, what do I do now??

FATHER (not believing what he’s hearing): Take your damn clothes off and get into bed with her…

After another 5 minutes poor Wafula is on the phone again…

DAD (patience running thin): Shit! son, do I have to spell everything out for you?? Just put the hardest thing on your body where she pees. Good night nkt!!!

Just when the old man starts snoring. His son is on the phone once again…

WAFULA: Okay Dad, I have my head in the toilet bowl. What do i do next??

DAD: DROWN YOURSELF YOU BLOODY IDIOT..

BREAKING – ICC Issues Arrest Warrant Against Journalist Walter Barasa For Bribing Witnesses < Previous
PHOTO – This Lady Was Very Excited To See President Uhuru Next >
Recommended stories you may like: