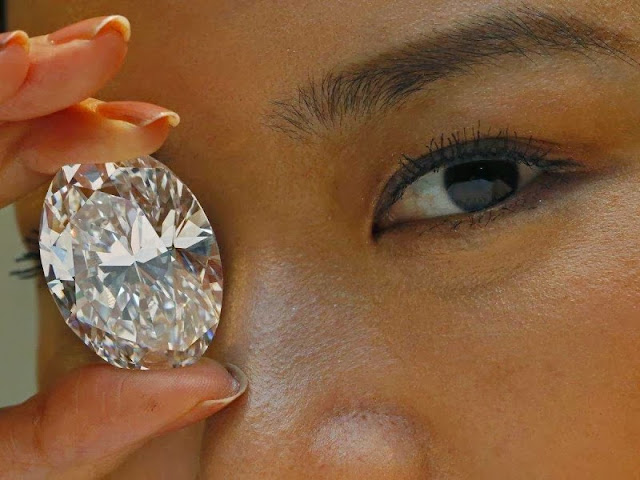 HONG KONG (AP) — A white diamond the size of a small egg sold for $30.6 million at a Hong Kong auction Monday night, edging out the previous record for such a stone set just six months ago.
Two phone bidders competed for the 118-carat rock from Africa in six minutes of measured bidding until one dropped out in the Sotheby’s jewelry auction, part of fall sales of art and collectibles by the firm and its rivals.
The twice-yearly ritual in the southern Chinese city draws wealthy collectors from mainland China and other Asian countries and has made the city one of the world’s busiest auction hubs.
The “flawless” oval diamond, mined and cut two years ago, was hammered down for 212 million Hong Kong dollars ($27.3 million), just under the low end of the $28 million to $35 million estimate range set by Sotheby’s. Total price including commission came to $30.6 million.
That was more than the previous record of $26.7 million for a white diamond set in May at Christie’s in Geneva.
The stone, which weighed 299 carats when it was found in the rough in 2011, is the largest and most significant such diamond graded by the Gemological Institute of America. Sotheby’s says it was discovered in southern Africa but won’t name the country because the seller wishes to remain anonymous.
The auction’s other highlight was a 7.6-carat flawless, round, vivid blue diamond that sold to a phone bidder for HK$125 million ($16.1 million) before commission, less than the $19 million estimate.
The two gems were among 330 lots of rare jewelry that fetched a total of $95 million.
“Hong Kong has in the last few years pulled itself up alongside Geneva and New York as one of the three major selling centers at auction” for diamonds, said Quek Chin Yeow, deputy chairman of Sotheby’s Asia and an international diamond expert.
But he added that the results should not be taken as an indicator of how wealthy Asians are being affected by economic trends such as China’s slowdown. That’s because such stratospheric prices can only be afforded by the super rich, who he said are mostly immune from such fluctuations.
The world record price for a jewel at auction was set in 2010, when London jeweler Laurence Graff paid $46 million for a “fancy intense pink” diamond weighing 24.8 carats.
That record could be blown away in November, when Sotheby’s puts a pink 59.60-carat diamond on the block that’s expected to fetch more than $60 million in Geneva.

Raila Reveals Details on Exactly How He Was Tortured – Flame Of Freedom < Previous
PHOTOS – Fresh From Boeing Workshop in Seattle, Kenya Airways New Plane is Ready Next >
Recommended stories you may like: