Iran To Send Another Monkey To Space 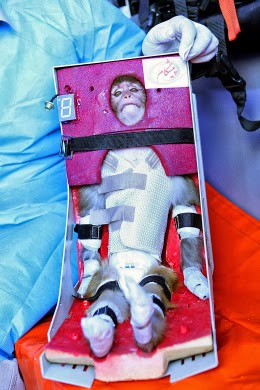 Earth to all monkeys: the next flight to space may be departing Iran within the month.
The deputy head of Iran’s space agency, Hamid Fazeli, reportedly told an Iranian newspaper that the agency plans to send a small animal into space soon for the second time in a year with the goal of launching a manned ship into space by 2018.
Earlier this year the program claimed to have sent a monkey out of the atmosphere and brought it back, though skeptics pointed to before-and-after photographs that depicted two different monkeys. The Iranian agency attributed the discrepancy to a simple mix-up: the pre-flight photo was in fact an archived image of another, alternate monkey, they said.
Monkeys interested in getting a (the) seat on the upcoming flight must act fast! According to the Associated Press, Fazeli was quoted in the the conservative daily Jomhuri Eslami as saying that the agency was considering other animals that weigh about the same as a monkey.