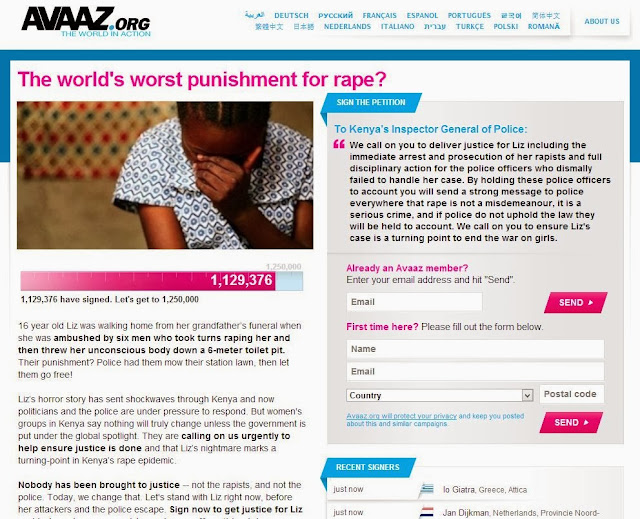 More than a million people have signed an online petition demanding justice after three men accused of brutally gang-raping a girl in Kenya were ordered to cut grass as punishment.
The policemen who ordered the punishment should be disciplined for failing to investigate rape charges, the petition said.
The 16-year old was gang-raped and dumped in a pit latrine in Busia.
When her case came to light earlier this month, it caused national outrage.
The director of public prosecutions has ordered the national police to investigate why the local force, known as administration police, did not fully investigate the alleged rape, and instead ordered the suspects to cut grass.
The alleged rapists are reported to have gone into hiding.
The petition – published by online campaign group Avaaz – called on Kenya’s police chief David Kimaiyo to “deliver justice” for the girl, named Liz. Already over 1.1 million people have signed.
Her alleged attackers should be immediately arrested and prosecuted and disciplinary action should be instituted against police officers who “dismally failed to handle her case”, the petition said.
“By holding these police officers to account you will send a strong message to police everywhere that rape is not a misdemeanour, it is a serious crime, and if police do not uphold the law they will be held to account,” it added.
“We call on you to ensure Liz’s case is a turning point to end the war on girls.”
The 16-year old was attacked after returning from a grandfather’s funeral in a village in Busia, western Kenya, the local Daily Nation newspaper reported earlier this month.
Her back was broken during the attacks and she now uses a wheelchair, reported the paper, which first reported the story and led a campaign to raise funds to cover her medical costs.
– BBC
PHOTO – Probox Spotted in Nairobi With a Lexus Logo < Previous
PHOTOS of The Fallen Billboard Along Waiyaki Way Next >
Recommended stories you may like: