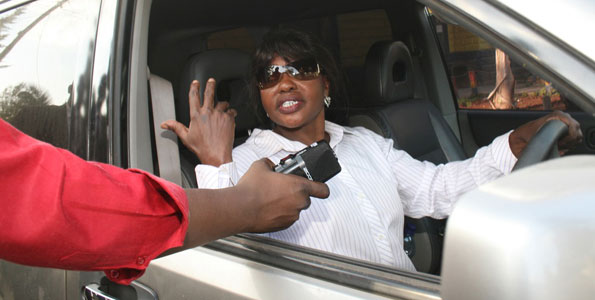 Ruth Akinyi, the wife of former cabinet minister Raphael Tuju, was yesterday arraigned in court, for assaulting a watchman.
She pleaded not guilty to charges that on August 23, 2013, in Upperhill, she assaulted Felix Omondi Obuodha.
Felix was a watchman at Lacoline Garden along Masaba road. The offence is said to have been committed a few minutes to midnight.

The watchman was examined by a police doctor and issued with a P3 form.

According to Felix, Akinyi drove into the gate while he was opening it, and knocked him down, causing him chest injuries.
Akinyi, who lives in the apartments, did not even bother to check his status, and he was instead given first aid by another tenant.

Akinyi on her part says she hit the gate to escape from suspected robbers who were trailing her. She accused the watchman of opening the gate slowly. However, she denied knowingly hurting Felix.

She was granted a Sh50,000 cash bail with the hearing date set at November 28.

Behind The Scenes PHOTOS of Teacher Wanjiku’s Airtel Ad < Previous
PHOTOS – Ruto Given Full VIP Treatment At The Hague Next >
Recommended stories you may like: