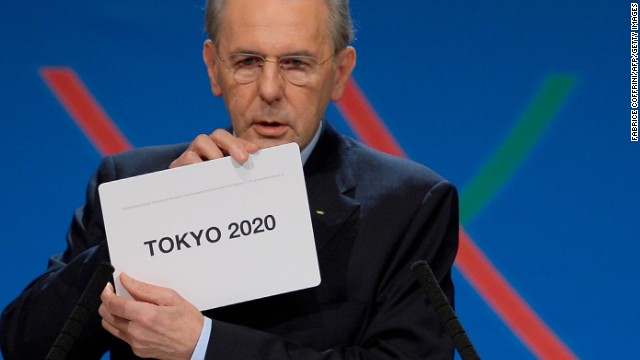 (CNN) — Tokyo has been chosen by the International Olympic Committee to host the 2020 Summer Games.
In voting Saturday in Buenos Aires, the committee picked Tokyo over the two other contenders, Madrid and Istanbul.
The announcement came at 5:20 a.m. Tokyo time, but a large crowd watching on an outdoor video screen burst into cheers.
Tokyo previously hosted the Summer Games in 1964.
Japan’s bid for 2020 billed the city as the safe choice — despite radiation leaking from the Fukushima nuclear plant. Prime Minister Shinzo Abe personally made a presentation to the committee and promised an effective cleanup.

“I am so happy, I am overjoyed,” Abe told reporters at the post-announcement press conference.
“I would like to share this joy with the people back home. We’ve received so much support from the people of the IOC and I would also like to express my support to them. And to the people around the world.
“A safe and secure Olympic Games will be staged by us — I think that was another hope for their support. I would like to pledge that we will be discharging this responsibility.”
Abe said Tokyo would try to stage a successful Games to thank the world for its support after the 2011 earthquake and tsunami that devastated parts of Japan.
“Sport has the power to unite people,” he said. “We experienced that after the earthquake and tsunami in 2011, when athletes came to our country and helped us. Japan needs the power of sport, we need hopes and dreams.”

Abe said Tokyo’s 1964 Olympics had left a strong impression on him as a child.
“I was only 10 years old but a lot of kids like me were fascinated. Like many children I dreamed of winning a medal. It was a celebration giving hopes and dreams,” he said. “The joy (of winning the 2020 vote) was even greater than when I won my own election.”
Tokyo’s bid came in at $5 billion to $6 billion, compared to $19 billion pledged by Istanbul, said Ed Hula, editor and founder of aroundtherings.com, which covers the business and politics of the Olympic movement.
But Tokyo’s government has already amassed a $4.9 billion Olympic fund to pay to prepare for the Games, Hula said. And a $1 billion national stadium that will be used for the athletic events and the Opening Ceremonies will already have been built for the rugby World Cup in 2017 and is not considered an Olympic expense.

Turkey would have been the first Muslim country to host the Games, and with a median age of less than 30 years, one of the youngest. However, it missed out for the fifth time.
Istanbul would have been “a more emotional choice,” Hula said. But its huge bid would have been needed to fund infrastructure improvements, including modernization of its transportation system.
Turkey’s border with Syria also might have troubled some committee members, he said.
And this summer, the image of Turkish sport took a hit when about three dozen athletes tested positive for drugs, he said.
June’s rioting in Istanbul’s Taksim Square may also have tainted the city’s hopes, though Turkish Prime Minister Recep Erdogan tried to persuade IOC members ahead of Saturday’s vote.
“We live at a time when our region and the world crave for peace,” Erdogan said as part of Istanbul’s final presentation.

“And at this critical moment, we would like to send a strong message of peace to the whole world from Istanbul, the city of friendship and brotherhood.”
Tokyo led after a first round of voting Saturday but fell short of a majority, with 42. Istanbul and Madrid tied for second on 26 votes each, and a 49-45 tiebreaker vote put the Turkish city in the final runoff with Tokyo.
Tokyo won the deciding vote, 60 to Istanbul’s 36, according to an IOC tweet.
Madrid, like Tokyo, was a repeat bidder — making its third consecutive case for the Games, one that was little changed from previous attempts, Hula said.

The Spaniards’ $2 billion bid said they had little need for new infrastructure, he said. And they have ample sports experience, having hosted a number of other high-profile, international events.
But the country’s economic plight remained a drawback, with one out of four adults unemployed. Though Prime Minister Mariano Rajoy insisted that rate is improving, “the fact is that most reasonable, sensible economists think unemployment is going to linger at a high level for years to come,” Hula said.
And Spain’s athletes, too, have had issues with doping accusations. In a case that occurred several years ago, blood bags from athletes who had tested positive were destroyed, Hula said. “It’s been a long-running situation.”

Spain’s Prince Philip, a former Olympic sailor, was a lead figure in Spain’s presentation.
“Some people around the world have questioned hosting the Games in a time of economic uncertainty,” he told the IOC members Saturday ahead of the voting.
“But I don’t see this as a threat to the Olympics, I see it as an opportunity. The benefits of sport are measured in generations, not in dollars.”

On Sunday, the three sports competing to be added to the 2020 roster will know their fate.
Squash is hoping to be included for the first time, but is up against a combined baseball/softball bid and wrestling — which is seeking to be reinstated.
The 125th IOC Session will be the last for its president Jacques Rogge, who is standing down after 12 years in the role. The 71-year-old’s successor will be elected Tuesday.
The 2016 Summer Olympics will be in Brazil. The Winter Olympics will be held in Russia in 2014 and South Korea in 2018.

BREAKING NEWS: VIDEO of Nairobi Governor Evans Kidero Slapping Rachael Shebesh < Previous
PHOTOS – ‘Ayayayaya..You’ve Slapped Me Kidero’ Is Now On These T-Shirts Next >
Recommended stories you may like: