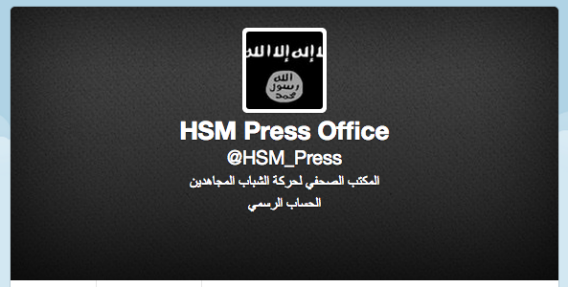 The Twitter account of Somalia’s Al Qaeda-linked Shabab rebels was suspended Saturday after they used the site to claim responsibility for an attack on a Nairobi shopping mall that left 59 dead and 175 wounded.
A message from Twitter on the English-language @HSM_Press account read that the account was suspended, the third time this year that the group has been expelled from the site.
According to Twitter users are blocked “for any unlawful purposes or in furtherance of illegal activities”.
The Shabab’s previous account, @HSMPress, was suspended in January after the group posted photographs of a French commando they killed and threatened to execute Kenyan hostages.
They opened another account, @HSMPress1, but were again suspended earlier this month after threatening Somalia’s internationally-backed president.
The group issued a string of messages on Twitter Saturday, claiming its fighters were behind an attack on Nairobi’s upmarket Westgate shopping mall.
“The Mujahideen entered #Westgate Mall today at around noon and are still inside the mall, fighting the #Kenyan Kuffar (infidels) inside their own turf,” the Islamist militants had said on Twitter.
“What Kenyans are witnessing at #Westgate is retributive justice for crimes committed by their military,” the group said.
AFP
UPDATE: Twitter has since suspended the account, and Al-Shabaab has allegedly opened another account @HSM_PRESS2.
UPDATE: Their new Twitter account has also been suspended.

Ruto Requests ICC To Adjourn, So He May Deal With Westgate Attack < Previous
TD Jakes Mourns With Kenyans Following Westgate Attack Next >
Recommended stories you may like: