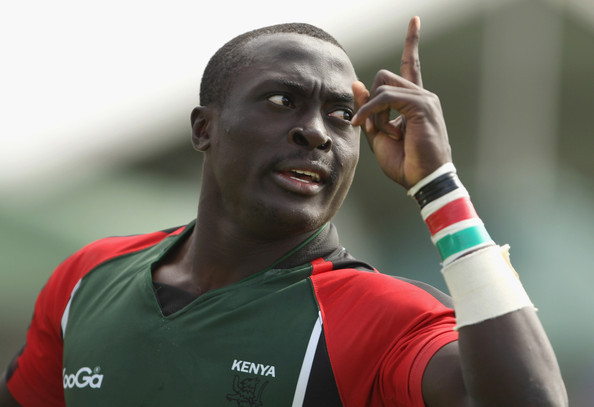 Kenya rugby sevens star Collins Injera has been named the face of Samsung Galaxy Mega in East Africa.
The six month deal comes with an option of further renewal. It was facilitated by Local Sports Management Consulting house, Pacific Sports..

Samsung Electronic East African Chief Operating Officer Robert Ngeru said they settled on 26 year old Mwamba RFC winger for his great contribution to the national team in the last few years.
“We chose Injera because of his skills, popularity and the following he commands among fans. We have converted his skills from the pitch and brought it to mega pixel which we believe will be helpful to our course. His is consistent with the hand held device’s unique features,” he said.

“He is well known for his achievements with the Rugby Sevens team; his eye for the try line, electric pace and clinical finishing ability on the field has seen him deliver a mega performance. We are looking forward to the partnership with him will see us engage fans around the similarly powerful Samsung Galaxy Mega Smartphone,” he added.

Though no monetary details were revealed, Injera said he was happy to be working with Samsung, as he was a technology enthusiast.
“I am glad to partner with Samsung. This is about technology and it is a course I am passionate about,” he said.

Injera now follows the footsteps of David Rudisha, who is the face of several brands, among them Kiwi and recently Safal conglomerate.

AUDIO – The Actual Recording Announcing 1982 Coup on VOK < Previous
Photo – Nick Mutuma’s Sister Graduates From Cardiff University Next >
Recommended stories you may like: