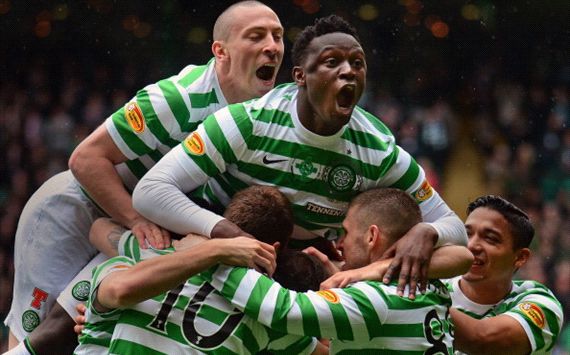 By Dennis Mabuka
Arsenal are poised to slap in a £10 million-plus bid for Kenya and Celtic FC midfield star Victor Wanyama.
SunSport understands that Gunners boss and long term admirer Arsene Wenger is finally ready to spend big on the Kenyan midfielder — and meet the SPL champs’ asking price.
Hoops chiefs are believed to be aware of Wenger’s interest and are bracing themselves for a huge offer for the 21-year-old who has two years left on his contract.
Wanyama — a major success at Parkhead following a £900,000 move from Belgian side Beerschot in 2011 — has so far resisted Celtic’s attempts to agree an extended deal.

He is now rated one of the top young prospects in European football by governing body UEFA and is also on the radar of Italian giants Inter Milan.
Celtic are expected to sell at least one of their leading stars this summer, with keeper Fraser Forster and leading goalscorer Gary Hooper their other top assets.
Wanyama, however, could be set for the Emirates in a record sale for the club — with the notoriously cautious Wenger having tracked his progress, especially in Europe, over the last year.

Other Premiership sides, including Manchester United and Southampton, have been linked with him. But Arsenal now look favourites to grab the powerful Wanyama who, privately, is believed to be keen to move to a higher level.
He is a major favourite of the Celtic fans and has publicly declared his happiness at the club.
But, after two successive titles and last season’s Champions League heroics — including a sensational scoring display in the win over Barcelona — he would not turn down a move to the English top flight.

Caroline Mutoko Off To Harvard For Further Studies < Previous
Raptcha Cuts Off His Dreadlocks – Before n After Photo Next >
Recommended stories you may like: