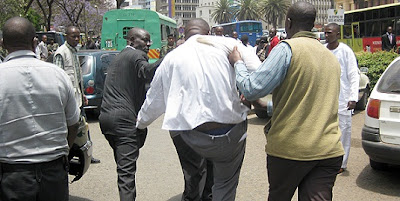 A widow has been swindled of more than Sh75,000 school fees for her daughter by people masquerading as ‘men of God’.
26-year-old Maureen Jalega (pictured) from Chavakali in Vihiga County who is a clerk at Western Express Coaches fell victim to a well-orchestrated con that lasted for a tedious six hours of prayer and ‘prophetic’ utterances.

Two conmen stripped the woman of her life savings, a total of Sh75,692, hampering efforts to educate her only child.
“The two men accosted me when I was disembarking from a public service vehicle. One of them identified himself as Pastor Edward while the second went by the name Oscar,” she recalled.
She said the pastor started telling her strikingly accurate things about her personal life and the problems she was facing which convinced her to listen.
The young widow was preparing to take her four-year-old daughter to school yesterday when she was conned of all her money.
“I was thinking of how my child would go to school and how I would pay my rent using the little money I had without spending my savings. The duo convinced me to get into their white vehicle and tie up the Sh75,692 I had in my purse inside a handkerchief together with my ATM card for him to pray for my finances,” said Ms Jalega.

Alex Ferguson Set To Announce Retirement This Week? < Previous
Full List of Groove Awards 2013 Nominees Next >
Recommended stories you may like: