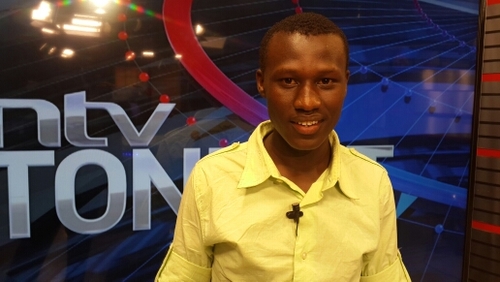 Last night, Larry Madowo hosted Otonglo narrator Daniel Owira in studio, for the second time in a few days.
Owira talked of his experience meeting the president and how his life has changed since his plight was highlighted on NTV.
Towards the end of the interview, Larry Madowo created a Twitter account for him, on their big touch screen, live on TV. Luckily, the username @DanielOwira was waiting for this moment.

Excited about tweeting, Owira went on to explain what his first tweet will be, but as he soon realized, he was only allowed 140 characters.
Less than 5 minutes after joining, the young man had 1000 followers. 8 minutes later, the number stood at 2000, and this morning, Owira has over 5000 followers.

His first tweet was a thank you message to the president and the people of Kenya.

Thank you Mr President @ukenyatta for the support, and to my fellow Kenyans. God bless you all and I promise I will never let you down
— Daniel Owira (@DanielOwira) May 2, 2013

It is important to note that he got his first 1000 followers even before tweeting anything.
Currently he is following 7 people among them: Larry Madowo, Uhuru Kenyatta, NTV Kenya, and Michelle Obama.

Utengano, the set book, Returns in 3D, and Other Funny Pictures This Week < Previous
Raila Odinga Jets Back From London For His Hot Ugali Next >
Recommended stories you may like: