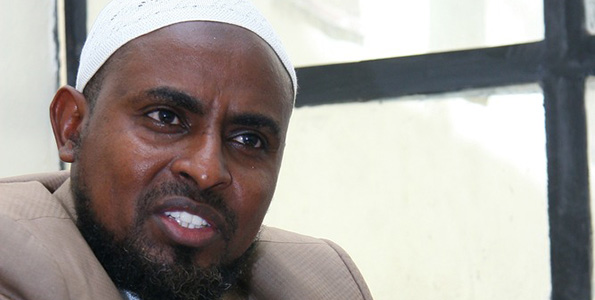 Former presidential candidate Mohammed Abduba Dida, has added his voice in the MPs pay increase saga.
Dida has said that it was not wrong to symbolize the MPs greed with pigs, even though the animal is ‘Haram’ according to the Islam religion.
“It is not wrong for protestors against the salary increment to compare the Mps behaviour to pigs.” said Dida
“It is okay to compare human being to pigs if they behave like them,” he added.

Read: Aden Duale To Sue For Being Likened To A Pig

House Majority Leader Aden Duale has promised to sue the organizers of #OCCUPY PARLIAMENT protests, after they branded a pig his name just outside parliament gates. Duale said that it was wrong for them to tarnish the name of a practicing Muslim, by associating him with an animal prohibited by his religion.
“I am planning to sue these fellows who branded me a pig, this is a big issue in my constituency right now,” he said in parliament.

Dida’s remarks are likely referring to Duale’s case, since no other member has protested. Mithika Linturi, another MP whose name was painted on the pigs, was actually not offended, saying that pork is his favourite meat.

Chris Kirubi Reveals Why He Has Many Female Workers.. And What Happens When They Get Pregnant < Previous
Powerful Mother’s Day Message By Mungai Mbaya To His Late Mother Wanade (Mother-in-Law) Next >
Recommended stories you may like: