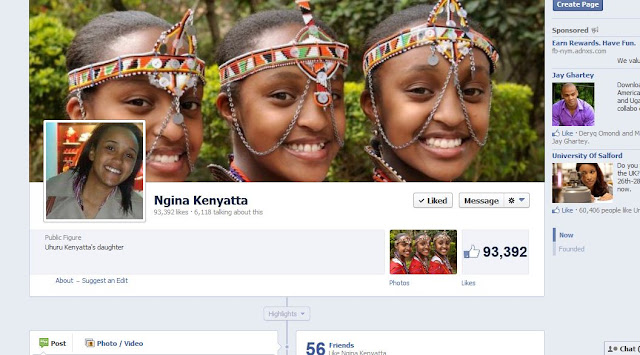 The page administrator has been posting regular updates suggesting he/she is the first daughter, and many Kenyans innocently believe they’re dealing with the Ngina Kenyatta.
Though the admin has not posted anything controversial yet, the government is taking precautions and has warned the public to shun pages about the first family.
Government spokesman Muthui Kariuki yesterday said that any Facebook page about the first family created after the elections is fake.

I would also advise that you ignore pages purporting to be those of member’s of the first family and created after the election. We will advise if any new pages are created.

That statement by Muthui cast doubt on the authenticity of first lady Margaret Kenyatta’s Facebook page, as it was created 3 days after the elections. The page has been widely accepted as NOT fake, but Uhuru Kenyatta, through his Facebook page, has not acknowledged it the way he acknowledged Statehouse official page.

Yesterday, we had an article that looked into Ngina Kenyatta’s page in particular, and the conclusion was that it was indeed a fake. This was after the admin posted a random internet photo of a beautiful bedroom, to suggest it was Statehouse bedroom.

Another fake Facebook page is targeting another member of the first family, Jaba Kenyatta. The first son has had some of his private photos posted on the page, with the admin using first person pronouns, hoodwinking the public that he/she is indeed the first son.

Some other celebrities in the country who have been victims of impersonation on social media include: Caroline Mutoko, Janet Mbugua and Julie Gichuru.

Corporates are now also feeling the pinch, with several of them having fake pages. The government spokesman particularly warned of the page K24 Peace, which is conning Kenyans by offering non-existent jobs. In a Facebook post yesterday, Muthui Kariuki wrote,

Facebook currently has hundreds of pages and accounts impersonating all manner of people. I would like to caution Kenyans that they do not their personal details with any organization purporting to offer jobs unless they can provide a fixed address, land-line number and proper registration details. One such page ‘K24 Peace’ has been using the Presidential Standard and tweeked covers copied from the statehouse page. I ask Kenyans to be careful.

The government has very little capability in tracking down Facebook page admins, and this has particularly come out clearly following the continued operation of dozen of pages spreading nothing but hate.
Though the Ministry of Information promised to track down IP addresses, it is general knowledge that Facebook take user privacy very seriously and it would take a lot for them to diverge such information to anyone.
It will however have to be seen steps the new government and especially the president will take to crack down social media impersonation, now that his family has been affected.
The government can for instance work closely with the US government in ensuring Facebook takes down fake and hate pages in a timely manner.
© nairobiwire.com

Drama as Monkey Seduces Rongai Woman < Previous
Pictures of Sonko and Shebesh’s Families Hanging Out at The Village Market Next >
Recommended stories you may like: