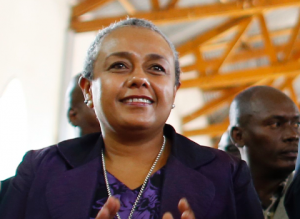 Being publicity-shy and very soft spoken, Margaret Wanjiru Kenyatta has now been thrust into the public limelight. Margaret went to the Prestigious St Andrews school in Molo and some of her friends say she likes to live a simple normal life.
“She drives herself to places and most of the time you will find her in social places enjoying a cup of coffee,” said one of her friends. Margaret is the daughter of Dr Njuguna Gakuo, a former director of state-controlled Kenya Railways corporation.
She met Uhuru in Mombasa and got married to him at the Holy Family Basilica Nairobi in 1989. They have three children. Two sons, Jomo and Jaba and one daughter, Ngina.
However, one of the most recent public appearance was a few weeks ago at the Sarova Panafric during the 44th birthday party celebrations for Ahadi Kenya CEO Stanley Kamau.
She has been a strong supporter of her husband and was often on the campaign trail with him. She is also the one who accompanied him to the Hague last year together with their son Jomo.
the Star

The Team That Made Uhuru President < Previous
Politicians Tearing Into Each Other on Facebook – Hilarious Next >
Recommended stories you may like: