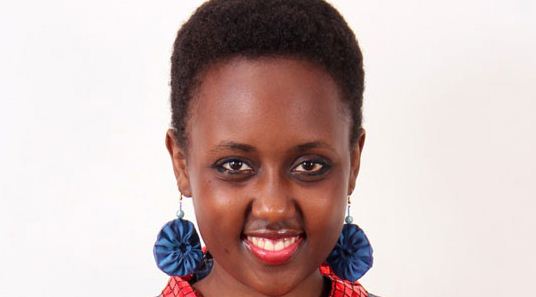 At just 22, Julie Wang’ombe has already had her moment in history. She was one of the brains behind President-Elect Uhuru Kenyatta’s victory speech last week. The speech was hailed as conciliatory and received high marks from the public. Julie shared her story with Philip Mwaniki.

What was going through your mind when Uhuru Kenyatta was reading the victory speech?
The only thing on my mind at that moment was, “Please teleprompter, don’t fail me”. I did not have the time to let it sink in because if the autocue jammed, then it would have been a disaster.
There were no tears being shed?
By me? No. I was running around and at the same time trying to remember if there was a typo I was supposed to have removed but forgot. But I knew the speech was good because he (Uhuru Kenyatta) had gone through it countless times and liked it.
Has it sank in yet?
No. I love the reaction it got and how well it came out, but it still hasn’t sank in that I had a role to play in writing the speech; but make no mistake, I am very proud of what we accomplished. The whole campaign team was young and very energetic.
When did you start writing the speech?
Two weeks prior.
Were you that confident?
You never know how many speeches we had written, remember Uhuru and Ruto had said they would concede if they lost… I’m just saying!
So you had the speech ready two weeks prior?
Not really. That’s when someone said that we start preparing it but even as he left Bomas after picking his IEBC certificate, I was still going through it and adding a comma here, removing a word there… I literally had to be peeled off the computer.
I wasn’t changing the speech, just making sure everything went well and he came off as presidential as possible. Something as simple as a comma could have changed the speech.
Did you work on the speech with Uhuru Kenyatta?
Yes. We were several, we were working on it at his office and we would draft something, take it to him, he would make a few changes here and there and we would take it back. It was a back and forth process.
Did he rehearse it alone or with you as you wrote it?
He would read it aloud so that we could get the feel of it but he is a good orator so we did not have to do a lot of rehearsals, thankfully.

Were there things you had to include last minute?
Of course, the deaths of the police officers in Mombasa, the good showing by the Kenyan media were things that we included later because they mattered and had to be highlighted. The President-Elect is the one who said what should go into the speech and what shouldn’t. He was the final word as it was personal to him.
Has he called to thank you for a job well done?
He did thank the campaign team for a stellar job and that was enough. This was not a one person job because all of us had a role to play in it. But he knows who does what and how and him agreeing to use the speech was enough for me.
The nature of Kenyan politics is that not many speeches are required especially during the campaign
True. Most of the time is spent in rallies and a speech cannot work there so I ended up helping on building content for the website and other stuff but it was always fun because of the people I was working with.
People talk about how youthful the “UhuRuto” campaign team was
It was a very young team. Led by Sakaja, they did recruit very young guys who had a vision for the country and were ready to work. Most guys were pretty young but they knew the job they had to do.
How were you recruited?
Someone heard me performing my Spoken Word piece and was impressed and they asked me if I can a write a speech.
Just like that?
Just like that! They didn’t tell who it was for or why but I took it as a challenge and decided to do it. They sent me details and I pieced them together and sent it back and they were very impressed with what I did. I later came to realise my speech was used by Uhuru who was then Finance Minister and I was beyond stoked. He hadn’t even announced he was running for the presidency.
You were studying at Duke University then?
Yes, I was in the US but I fell ill and had to come back home to be close to my family and immediately I got back, the Uhuru team asked me to join them and I think I was 20 and I have been with them since.
There are people who say you copied Obama’s 2008 speech…
That is laughable. Did Obama talk of the officers who were killed in Mombasa, did he thank Kenyan media or talk about co-operating with international institutions? Obama’s speech was for American people, it would have been a disservice to the Kenyan people. That was a speech that was crafted for the Kenyan audience and the president-elect was involved in it from the beginning.
You are also very talented when it comes to spoken word
I love words and spoken word has been my love since I was a teen. I am currently working on a spoken word gospel album to be released later in the year and I am looking forward to that. I am so excited.
Wait, if Uhuru ends up in State House, won’t you follow him?
I will kindly pass on that question.
Your piece, “A poetic reintroduction to Africa” is a hit on Youtube
Thanks. That was at the TED Talent search at Hillcrest and I was one of the 12 finalists. It was a good platform and I love that my piece was very well received.
So what next for Julie?
I am in college studying International Relations with a focus on development and I have a heart for social justice so I guess that will be my path. I am also passionate about the Church.

Esther Passaris: Is Our Democracy Being Compromised in Broad Daylight? .. Evidence That it is. < Previous
Mike Sonko Gives His Followers the Name Sonkolets .. And Talks About His Haters Next >
Recommended stories you may like: