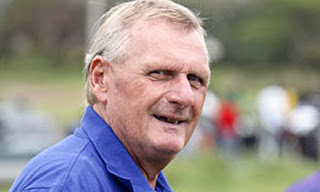 Former AFC Leopard coach Jan Koops is was over the weekend left Sh 50,000 poorer, after his house help disappeared with the money.
Koops, who is the head coach at Kolongolo FC, said that on Friday, he had left his house help in his Buru Buru home with Sh 50,000, with instructions to bank it in his account. He was leaving for Busia.

“While in Kisumu on Sunday I went to withdraw some money using  ATM card but was shocked to find that the balance did not reflect the money I gave my house-help; Esther Wambui Ndungu. When I called my friend who had travelled to Nakuru for a wedding she revealed the house-help had called to inform her that she was returning to their Nyahururu home,” he said.

The coach however says that he habours no ill feelings and is ready to forgive his maid of 2 years, should she call to apoligise over the incident.
“During my two-year tenure with her she had become part of my family and I would be the last to pursue a legal case against her,”

He further adds that the incident will not deter him from guiding Kolongolo to victory this Saturday.
© nairobiwire.com

Mzalendo Kibunjia Says Both CORD and Jubilee Tried To Hack IEBC System – Leaked Phone Recording < Previous
They’re Saying #KOT Attacked Them Because of Free Government Internet.. Will #SomeoneTellNigeria Next >
Recommended stories you may like: