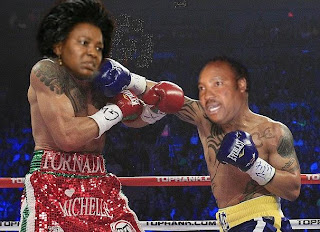 Yesterday, several people alleged witnessing TNA’s Nairobi Governor candidate Ferdinand Waititu beat up women rep candidate Rachael Shebesh. Some claimed it was a slap with others saying it was a punch.

It was during the launch of Waititu’s manifesto at the Panafric Hotel in Nairobi. Shebesh and Sonko had made a surprise appearance, after dumping Waititu for Jimnah Mbaru a day earlier. Their entry was met with boos from those in attendance.
Uhuru Kenyatta would soon reconcile the three, ordering Sonko and Shebesh to support Waititu. The Jubilee presidential candidate combined his disputing settling skills, oratory and authority to make Sonko and Shebesh make a promise to back Waititu.

As the story goes, Waititu would soon punch Shebesh after she insisted that he produces money meant for all Nairobi TNA aspirants; money Waititu is said to have pocketed. The actual wording was, ” Waititu has just punched Shebesh leaving her sprawling on the floor”.

To add further doubts on the story, some versions had it that Ruto was following the proceedings from under a table.

The credibility of those rumours are next to zero, and until there is photographic evidence, we can all grab a drink and assume it never happened.
© nairobiwire.com

Uhuru Overtakes Churchill To Have The Most Liked Facebook Page In Kenya < Previous
Top 100 Schools KCSE 2012 (Released 2013) Next >
Recommended stories you may like: