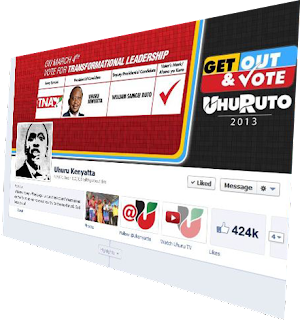 Uhuru Kenyatta’s Facebook page has finally dethroned Daniel “Churchill” Ndambuki as the most liked page in Kenya. His likes now stand at 424,000, 5000 more than Churchill’s.

The Jubilee presidential candidate achieved this milestone yesterday, and his campaign team released the following statement.

The page, facebook.com/myuhurukenyatta is further receiving hundreds and at times thousands of likes in a single day, making it one of the fastest growing FB pages in the country.

Churchill will have to contend with having the second most liked Facebook page, after holding the first position for a few weeks. Before him was politician Harun Mwau, whose page had 450,000 likes towards the end of last year. His page likes currently stand at 332,000, meaning he has lost close to 120,000 likes in less than 3 months. Most of the likes were however not natural, but as a result of heavy advertising within Facebook, and allegedly bulk buying.

Celina of Mother-in-Law Now Hosting Karaoke Night (Photos) < Previous
Did Waititu Punch Shebesh over Missing TNA Money? Next >
Recommended stories you may like: