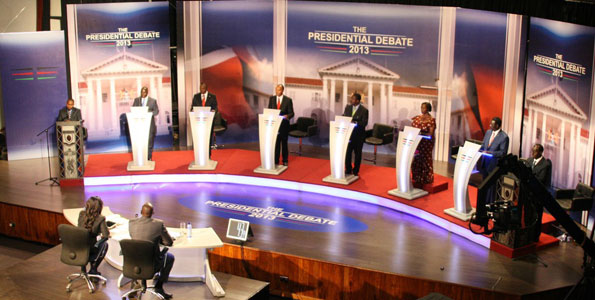 Mohamed Dida: A schoolteacher who joined the race spectacularly late, the political first-timer lit up the four-hour debate with his common touch, spiced with anecdotes that bordered on the comical. While he tended to rumble and be incoherent at times, Dida, 38, asked some basic but hard questions directed at the two perceived frontrunners, Uhuru Kenyatta and Raila Odinga, making them visibly squirm. Score : 4/10

Paul Muite: The 67-year-old lawyer who sought an injunction unless organisers included him. He had declared his candidacy early but then disappeared from the campaign trail only to resurface a few weeks ago. His intellect has never been in doubt and caused a stir when he flatly stated that it was not possible that the country’s grand coalition principals were not also facing International Criminal Court Charges. He performed well given he had nothing to lose and his short preparation time. Score: 5/10
Musalia Mudavadi: A composed—many say aloof – politician whose main campaign theme is that he is a safe pair of hands in the face of more hardline rivals, he looked decidedly colourless on the night as though he wished he were elsewhere. The 52-year-old belatedly stirred to life when discussing his policies on health and education, but by then it was already too late to leave a mark. Score: 5/10
Peter Kenneth: A suave, young politician with dashing looks and who has run a youthful campaign, he was fast out of the blocks selling his policies even before he had introduced himself, but then faded badly. He had a few shifty moments, like when he claimed he did not want ICC-indicted rival Uhuru Kenyatta struck off the ballot, but then insisted that Kenya was “bigger than all of us and not about individuals”. The 47-year-old limped home with some memorable broadsides at the dishonesty of tribally-inclined politicians and also showed good understanding of the national health and education problems, but with few specifics. Score 6/10
Uhuru Kenyatta: One of those believed to have the best shot at the presidency, he was articulate and had clearly rehearsed his policy lines well. However the deputy prime minister, 51, struggled to exonerate his campaign from charges of running on a tribal base, and didn’t help his cause further by confirming that the election was a referendum on the grave ICC charges he is facing. “Kenyans are fully aware of the charges I am facing,” he stated. In a veiled shot at fellow frontrunner Raila Odinga, he said disputes should be settled in courts, not on the streets, an allusion to the fallout over the disputed, and deadly, election of 2007. Score 6/10
Raila Odinga: The incumbent premier, the 68-year-old did well to fend off attacks by opponents over his stint as one half of a coalition government, blaming intra-government infighting. He memorably declared tribalism “a disease of the elite” but could not avoid taking potshots at Uhuru Kenyatta, charging that his chief rival’s campaign was intimidating smaller communities by bandying tribal numbers to prove their dominance. He generally enumerated his policies well, no doubt aided by experience at the head of government, but was unable to land a telling blow on his deputy. Score 6/10
James Ole Kiyiapi: A former permanent secretary in several government ministries, Kiyiapi, 51, gave a polished performance, drawing from his experience of beating the odds despite coming from a marginalised community (Maasai). He struck the right notes on governance but it may not be enough, lacking the staggering resources that some of his rivals command. He remains a breath of fresh air in Kenya’s cut-throat politics. Score 7/10
Martha Karua: The ‘Iron Lady’ of Kenyan politics, the feisty former cabinet minister probably got the edge the debate, as she sought to out her rivals’ rhetoric on tribal unity. In one riposte that drew cheers’ she declared that there was “no difference between a hungry Kikuyu and a hungry Luo,” in reference to the rival communities of frontrunners Kenyatta and Odinga.
She was firm on governance and had decent arguments on health and education, but also seemed a tad too eager to impress, interrupting others and harping on her own record. Strong on principle, the 57-year-old’s lone-ranger campaign has however struggled to make inroads on poll numbers, despite a raft of good policies. Score 7.5/10
Verdict: Despite what was an historic engaging debate that helped provide further insights on candidates in what is one of the most tightly contested elections in Kenya’s history, there are doubts if it would provide any perceptible shift in voter choices.
The talking heads at the TV stations remain convinced that opinion poll numbers will remain almost the same for all, with a runoff almost certain. However it certainly broke barriers, forcing leaders to discuss the near taboo-topics of tribal chieftains and the ICC while in the same room.

A second and final debate is scheduled. February 25th.
By Lee Mwiti

Dida Unchained: 101 Mwalimu Dida Quotes And Jokes < Previous
Open Letter To Mwalimu Abduba Dida Next >
Recommended stories you may like: