Miguna: Raila Paid My House help To Poison Me 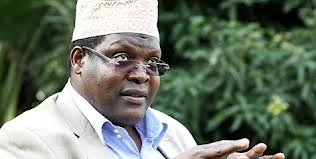 Miguna always finds a way to get the headlines. Days after his second book failed to receive as much airplay as his first, the former adviser to the prime minister is now in the headlines. This time round, he has come out to deny allegations that he assaulted his house help.
Reportedly, Miguna’s house help recorded a statement at Runda Police Station, claiming that Miguna had assaulted her, chased her away and refused to allow her pick her clothes.

The controversial author has a whole different story, and this is the statement he released yesterday.

Let me at the very outset say that by the grace of God/Allah/Nyasaye I am free, alive and healthy – and at my home in Nairobi. In fact, I have not left my house the whole day today.
I understand that there are despicable false rumours being circulated and disseminated by Raila Odinga and his agents that I have been arrested and is in police detention. I consider these rumours to be the height of desperation of a man who knows that his campaign has reached a dead end. Fortunately for Kenyans, rumours and propaganda – which is what Odinga excels in – don’t vote and will not vote on March 4, 2013.
I would like to disclose to the public that at about 6:30am today, my nephew who lives with me informed me that our house help confessed to him last night as they were watching my K24 TV live interview that Mr Odinga’s agents, who used to be my bodyguards – Odhiambo and Anyul – offered her Sh1 million and gave her poison to put in my food this week. They also offered to give her gadgets to tape all my telephone conversations, my conversations with third parties who visit me at home and to report to them details of my movements. My nephew reported to me that the house help stated that she was considering these offers in view of my “attacks on the Prime Minister.” Apparently, she claimed that I was responsible for the wave of rebellion against the PM in Luo Nyanza.
At about 7:10am, I terminated the house help’s employment in writing and paid her the monthly salary of Sh10,000 even though her pay is not due up to the end of February this year. She signed the termination letter voluntarily. There was no physical contact between me or my nephew and her.
Interestingly, as she was signing the termination letter and pocketing the money, both Odhiambo, Anyul and high ranking officials from the Office of the Prime Minister were busy calling her mobile telephone. I then decided to detain the two mobile phones so that the police could investigate this serious matter thoroughly.
When I asked the house help to put her things in a vehicle so that my nephew, who was present throughout, could drop her at the bus stop, the lady refused. Instead of allowing my nephew to give her a free ride, she walked away and left the compound. I have been informed that she was seen entering the home of a senior ODM cabinet minister who is my neighbour and the boss to one of the agents who have recruited her. I felt that was quite bizarre and telephoned my area OCPD, who responded within one hour, accompanied by the DCIO.
As I was giving my report and statement to the police at my house concerning the latest plot to kill me, the press started calling and texting, claiming that I was under arrest at the Runda Police station. Of course, I wasn’t. I was at home – and I am still at home.
Interestingly, I am told that the house help arrived with two junior police officers and the press in tow at my gate as I finished my statement at about 11:30am. However, when invited inside, she boarded a motor-cycle, which she had come with, panicked and left. Reports reaching me indicate that she went straight to the Office of the Prime Minister’s Building and is apparently sequestered there, perhaps being debfried on the next malicious and mischievous plot.
Meanwhile, the house help’s mobile phone kept ringing off the hook, with some of the numbers being traced to ODM cabinet ministers and senior OPM officials!
Unfortunately, the assassins and plotters panicked and started putting pressure on the Police, demanding that I should be arrested and locked away.
Your guess is as good as mine on why Raila Odinga and his thugs want to kill me – and when their plot seems to have failed – are now abusing their power and demanding hat I be locked away. He has also sent out his media hounds and social media goons to besmirch my name, character and reputation.
They will not succeed!
At about 1:20pm today, I welcomed about ten journalists who were camping outside my gate into the compound and addressed them stating the same things contained herein. I could see how disappointed some of them were that I was alone, at home, and addressing them in a relaxed and categorical manner.
Let me conclude with two things. First, Raila Odinga will not win the scheduled elections on lies, propaganda or nefarious plots against his opponents, critics or perceived enemies. And secondly, I am not afraid of Raila Odinga. As I said before, I am ready to face him head-on. It’s unfortunate that he has reduced himself to a pathetic criminal. It’s up to him. I will, however, continue to expose him and to fight him with the only weapon at my disposal: THE TRUTH!
Elections come and go. These ones won’t be different. But Raila Odinga must know that Kenyans are going to retire him on March 4th, 2013. He can choose to fight me and the books I’ve published through criminal goons or he could choose to address – directly – each and every factual claim in them. Te choice is his!
Finally, I wish to reiterate that my life is in serious danger. I am asking the police to provide me with twenty-four-hour security.
Thank you.
MIGUNA MIGUNA
Regards

Jaguar Was Paid Sh 5 Million To Join Jubilee, Then Sh 300,000 Per Performance < Previous
Miguna Beats House girl For Trying To Poison Him… Allegedly Next >
Recommended stories you may like: