By Ken   /   Tuesday, 29 Jan 2013 06:01PM   /   Leave a Comment
Mario Balotelli has had a few controversial scrapes during his time in the Premier League – but he has never stooped as low as this Manchester United supporter.
These photos, reportedly taken on Sunday night, show a United fan peeing on the City striker’s car while the 22-year-old was out eating a meal with friends.
The incident happened outside Manchester’s trendy city-centre Indian restaurant Zouk. 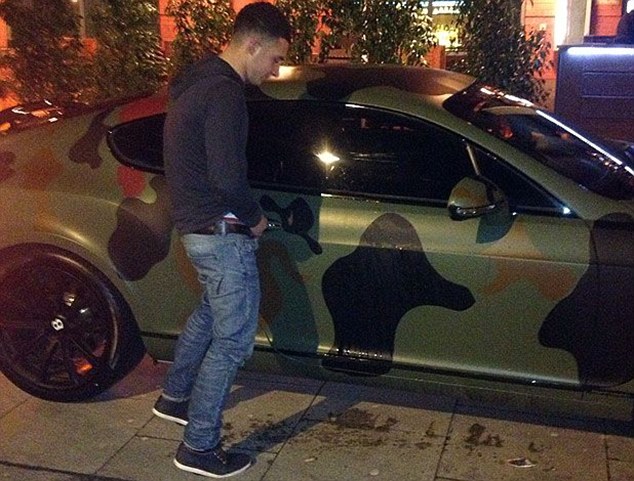 Balotelli’s £160,000 camouflaged Bentley is easily identifiable and a group of friends, all from the red half of the city, appear to have stumbled across the car while out in town.
It is some send-off for the young striker, who may finally be checking out of City this week after Italian giants AC Milan opened talks with the Barclays Premier League champions about a £24m move.
Balotelli was seen carrying some belongings from the club’s training ground on Monday before he joined his team-mates in London for the game against QPR at Loftus Road tonight. 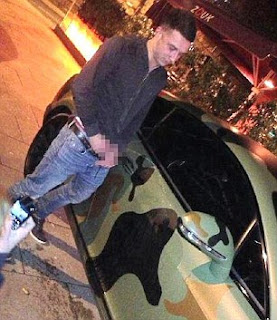 Milan are understood to have offered £20m but City – who have also had vague contact from Juventus – are determined to stick to their valuation.
Milan are expected to make another bid for the Italy forward after their audacious last-minute move for former Chelsea striker Didier Drogba fell through.
As was the case for Chelsea owner Roman Abramovich, Milan bosses discovered veteran Drogba had already signed an 18-month deal with Turkish side Galatasaray when they made their approach for him.
It made them all the more determined to land Balotelli, with efforts to reach an agreement being stepped up in the last 24 hours.
Sportsmail can reveal the City striker’s personal lawyer Vittorio Rigo, who works closely with his agent Mino Raiola, flew into Manchester over the weekend in readiness to try and negotiate a deal.

Financing the transfer remains a major stumbling block for Milan. City want over £25m for a player they signed from Inter for £23m in August 2010, while Milan value him at nearer £20m and are looking to include Kevin-Prince Boateng as a makeweight in any agreement.
With time running out, ahead of Thursday’s deadline, Milan are eager to reach a settlement, though assistant manager David Platt insisted he was in the dark over suggestions a move could be imminent.
SportsMail