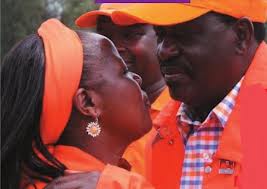 Starehe MP Margaret Wanjiru now wants the ODM party to grant her direct nomination to contest the Nairobi governorship.
Although Wanjiru did not categorically state that she must be nominated directly, she argued that the ODM party hierarchy in the city politics must display a face of Kenya and thus ensure that those contesting various seats don’t come from one region or community.
“We in ODM have said that the top four seats; that’s the presidency, governor, women representative and senator must be shared among various communities in Nairobi. The President will be Raila a Luo, governor Wanjiru a Kikuyu and the seats of women representative and senator will go for other communities,” she said.
The Starehe MP who is also the Housing assistant minister was speaking Wednesday morning during a breakfast show at Radio Maisha.
Wanjiru will face former Mumias Sugar CEO Dr. Evans Kidero and former Nairobi town clerk Philip Kisia for the ODM ticket.
She expressed optimism that her style of politics has endeared her to the voters while exuding confidence that she will capture the governorship in spite of moneyed rivals.
“Nairobi politics is not all about erecting huge billboard or wearing executive suits but being down to earth and enter slums to meet the people and solve their problems,” she added.
Nairobi ODM chairman and city Mayor George Aladwa on Wednesday dismissed Wanjiru’s remarks and warned Party leader Raila Odinga not to give in to such demands.  He revealed that a delegation had been sent allegedly from Raila’s office to prevail on Kidero to step down for Wanjiru but vowed to oppose such moves.
“We have told our party leader severally and we can’t tire to remind him that ODM must hold free and fair nomination. No one should come on the basis of tribe to demand a certain ticket and if that happened, then ODM is headed for a collapse,” Aladwa said.
The mayor, speaking to the Standard from Mbale in Western Kenya, the mayor wondered why Wanjiru was demanding a direct nomination on the basis of her tribe if she believes in the ideals of democracy.
“No one choose which tribe to be born and even if the President is a Luo, another Luo cannot be denied the right to contest another seat. We are saying let ODM hold a fee and fair nomination and w are ready to support whoever wins even if its Wanjiru, Kisia or Aladwa,” the mayor said.
Aladwa wondered why the issue of ‘the face of Kenya’ was being used in ODM while in rival TNA, almost all the aspirants from the presidency, governorship, senator, women representative and most of parliamentary seats in Nairobi were from one community.
Standard

Opinion Poll: Sonko Will Win Nairobi Senator Seat With A Landslide < Previous
Disbelief As UEFA Champions League Draw Turns Out Completely Similar To The Rehearsal Draw Next >
Recommended stories you may like: