Ferguson Will Sell Nani And Use The Money To Buy Wanyama 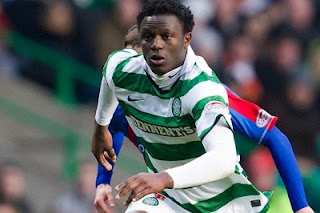 Manchester United are planning a January double-swoop for Porto’s James Rodriguez and Celtic’s Victor Wanyama – using funds from their expected sale of Nani.
Portuguese winger Nani is frustrated with life at United, where he has struggled for first-team action this season, and has been linked with transfer-window exits to Arsenal – where he could replace contract rebel Theo Walcott – and Juventus.
Roma have emerged as another possible escape route for the 26-year-old, with goal.com today claiming the Giallorossi are eyeing a loan move for the former Sporting Lisbon player.

And the Manchester Evening News claims the proceeds of Nani’s sale will be used to fund moves for winger Rodriguez and defensive midfielder Wanyama.
Flamboyant Colombian 21-year-old Rodriguez has been likened to his countryman Carlos Valderrama and former United star Cristiano Ronaldo.
Kenyan powerhouse Wanyama has played a vital role in his side’s march into the last 16 of the Champions League, scoring the opening goal when he was watched by United’s chief scout Martin Ferguson in the Bhoys’ famous Group G victory over Barcelona.

Are You Dating A Psycho? < Previous
‘How To Abort’ and Other Peculiar Google Searches By Kenyans In 2012 Next >
Recommended stories you may like: