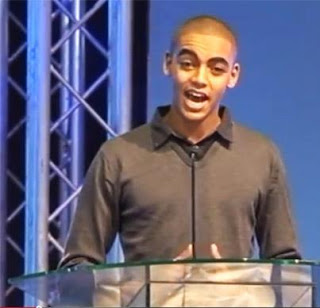 If you’ve been following your Facebook or Twitter timeline since Sunday, then you’ve most probably seen the name Andrew Kenneth flying by. Andrew is the son of presidential aspirant Peter Kenneth, and on Sunday gave the biggest endorsement yet for his father’s candidature. In a short speech, delivered before thousands of supporters at the KICC, Andrew spoke confidently on what his father believes in, and why he would make the best president.
Soon after his speech, social media was reignited and it was no longer about Peter Kenneth, but Andrew Kenneth. Ladies were all over the place expressing their new found love, to the dismay of their boyfriends. The fact that Andrew is just 19 did not cool issues, in fact it made them worse. He had successfully taken the spotlight away from his father. In the process, he probably earned his dad a few more votes from the undecided lot.
Apart from his looks, Andrew’s eloquence was praised by many, with some stating that he may be ripe for the presidency when Kenyans stop voting along tribal lines; something his dad is not as lucky to enjoy.
When the demand for Andrew became too much, tens of fake Facebook pages were created, with some getting thousands of likes within a few hours. When it became too much, Andrew Kenneth, or some one close to him came up with a brilliant idea, create an official page and have dad endorse it before his close to 100,000 fans. It worked. The fake pages which were until then growing uncontrollably, started experiencing reduced growth with some people ‘unliking’ them. The same happened to the fake twitter handle.
One Facebook page, /AndrewKennethKenya, had its likes at 8050 by the time of this writing. The impersonator said this of himself, “Im a proud son of Kenya’s next president…Honorable Peter Kenneth”. He /She also had a supporting twitter handle, @A_KennethKE, which was publicly given a thumbs down by Peter Kenneth himself.

Whoever is running it even had the guts to reply to PK’s confirmation with this tweet.

Fellow Kenyans,note that this is my real twitter handle and @AndrewKenneth93 is a parody account. cc #AndrewKenneth

Still on Facebook, someone was feeling threatened by Andrew’s rise. A page to counter his popularity with the ladies was created. “Andrew Kenneth Kaa Mbali Na Bibi Yangu”, already had close to 1000 likes as of last night. Most of those commenting on the page gave their stamp of approval, with one person writing,

Another fan, this time a lady by the name Naima wrote,

If you’d love to like Andrew’s page, then you can rest assured you’re liking the right one if you follow the link his father provided on this post.

© nairobiwire.com
Why She Is Cheating On You < Previous
Jicho Pevu’s Mohammed Ali Resigns From NTV – Heads Back To KTN Next >
Recommended stories you may like: