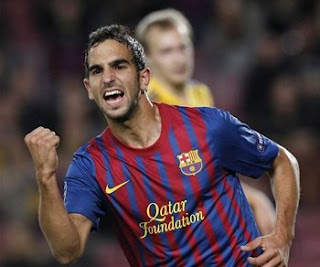 Barcelona defender Martin Montoya has been reported to the authorities for allegedly stealing a taxi driver’s wallet in Madrid. Montoya who was on international duty with the Spanish Under 21 side, reportedly called for a taxi to take him from Barajas Airport to the team’s hotel.
During the ride, the defender allegedly stole the wallet. According to the driver, he went in to the hotel to receive his mobile phone, tried to contact the Barca defender but was instead met with a representative of the national side, who told him to leave the hotel.
The driver then reported the incident to police and filed a complaint of theft against Montoya over his alleged taking of the wallet.
“In my wallet I had my documents, 230 euros and my daughter’s medical card. She’s interned in a hospital at the moment,” Mr Collado told Terra.es.
“Montoya told me that I was only a taxi driver and that he was a footballer, that it was going to be his word against mine.
“I filed a complaint at first but I wasn’t planning on following it through, but then a fake agent contacted me and threatened me. He also said I was a f****** racist. That’s when I decided to be serious about it.
“It was my second ride of the day and it was only 8:15 AM, there is no chance that someone else was the thief other than this t**t.”
The 21 year old footballer has however denied the accusations. On his twitter handle, he wrote, “The accusations coming regarding the theft of a taxi driver’s portfolio are totally false.”
© nairobiwire.com
This Nairobi Woman!! NKT < Previous
The Most Stupid Lawyer Questions. Next >
Recommended stories you may like: