Miguna To Vie For Nairobi Governor 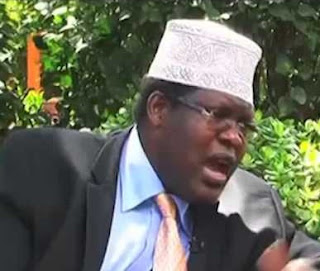 Miguna Miguna today revealed that he will vie for the Nairobi governor seat. The man with the same name twice, as he is referred to by Jeff Koinange, gifted the K24 journalist the exclusive today during an interview for his show, Capital Talk. The recorded interview will be aired Thursday night.

Anticipation had been building after it was revealed that the former adviser to the Prime Minister was scheduled to make a major announcement on the show. There had been speculation that he would be seeking the presidency, but it turned out to be what has been termed as the second most important seat in the country. Miguna’s party of choice is still not clear but you can bet it won’t be ODM.
Miguna Miguna has been a household name since the last general election, but his actions in the past few months have brought him much more limelight. His explosive book on the misdeeds of Raila and several government officials, and his subsequent book launch and promotion antics made sure that he was the basis of first news story on TV for several days.
As a contender for the governor of Nairobi, his chances might not be realistic, considering his lack of tribal clout or big party ticket. It is expected that ODM and TNA already have likely contenders and either of them will produce the first Governor of Nairobi. Among those in the race include: Evans Kidero, Phillip Kisia, Ferdinand Waititu, Fred Gumo, Jimnah Mbaru etc.

Update: Miguna Miguna will vie on an independent ticket.

© nairobiwire.com
IEBC Commissioner Impregnates His Sisters < Previous
Jalang’o And Avril Dating. Next >
Recommended stories you may like: