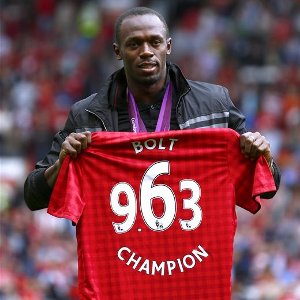 Manchester United manager, sir Alex Ferguson has decided to grant world’s fastest man Usain Bolt his wish of playing for the red devils. In an interview with the magazine ‘Inside United’, Ferguson said, “Usain’s a character and a big United fan. But it’s interesting he says he’d like to play in a charity game. It could be brilliant, and next year when we play Real Madrid’s Legends again, there could be opportunities to bring him up and see how he does.”
Bolt has all along hinted that he would be ready to stop sprinting and start playing soccer. After winning his Olympic gold medal, Bolt again said he would be available for trials if Ferguson called him. This time round, he was seriously considering playing football. The Jamaican has previously trained with United and will now have a chance to play for them.
The friendly will be played on June 3rd next year and the proceeds will go to charity.
© nairobiwire.com
Churchill Offers To Pay Congestina’s Rent For One Year < Previous
Ida Odinga Takes Congestina Achieng To Hospital Next >
Recommended stories you may like: