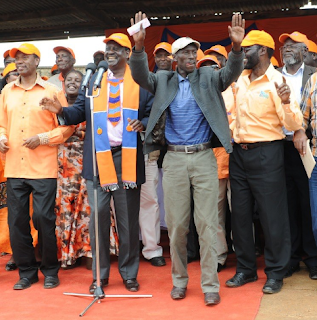 Prime Minister Raila Odinga’s campaign received a major boost after Olympic Gold Medalist Ezekiel Kemboi joined his Rift Valley tour on Sunday. The athlete was quite comfortable amongst the ODM team and even showed them some of his famous dance moves. When he was given a chance to address the crowd, he did not forget his day job and source of income as he asked the prime minister to better their training facilities. He was diplomatic enough not to enter into deep politics that may leave him on the wrong side of Rift Valley politics which is believed to be dominated by Raila’s rival, William Ruto.
This is not the first time Kemboi is having an encounter with the Odinga’s. When the athlete was accused of stabbing a girl, Ida Odinga called and gave him moral encouragement. He confirmed this during a TV interview after winning his gold, when he thanked Ida for what she did.
© nairobiwire.com
Kagwe Mungai: Music Graduate Almost Taking Over The Air Waves < Previous
Fake Journalists Taking Over Nairobi Press Conferences Next >
Recommended stories you may like: