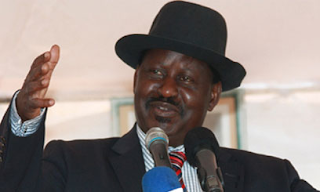 Raila will this Friday night hold a KSh 100,000 a plate dinner to help him raise funds for the coming elections. The dinner will be held at the Crowne Plaza Hotel in Nairobi’s Upper Hill. It has been organized by Raila’s campaign secretariat and some of his supporters. His campaign secretariat communication director, Barrack Muluka, confirmed that they were indeed the organizers.
In 2007, Kibaki’s campaign hosted a KSh 1,000,000 lunch at Safari Park, which was targeting to raise 100 million. It was not clear if the lunch met its target, but going by the number of guests, its should have.
This is expected to be the first of such dinners to be hosted by Raila. From September, several such dinners will be hosted abroad, targeting his diaspora supporters. A few more dinners are also expected to be held in Kenya before next year’s election.
This dinner comes barely two days after another dinner held Wednesday night. This was when Raila’s official campaign website, which is expected to bring him closer to the cyber world was launched. This is meant to compliment his social media presence.
Campaign dinners are not new. American presidential candidates are known to host several. In May, American actor George Clooney, hosted Obama for a celebrity campaign dinner where $15 million (Sh 1.26 billion) was raised. The cost per head was Sh 3.4 million.
© nairobiwire.com
Alpha Apologizes To EABL After Facebook Post. < Previous
The Year Is 2032. (EXTREMELY HILARIOUS PICTURES) Next >
Recommended stories you may like: