Mohammed Ali Exposes The Gospel Ltd, In His First Week At NTV. 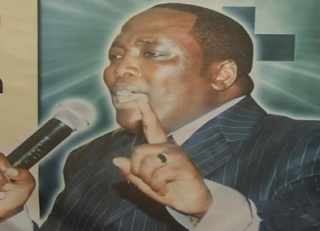 Mohammed Ali’s departure from KTN to NTV was the biggest news 2 weeks ago. It was unexpected and not many were sure what impact it would bring. For those who had their doubts, Moha proved that KTN needed him, more than he needed it. This weekend, all TV’s were tuned to NTV and for a very good reason, there was a rogue bishop on the loose.

Partnering with Ferdinand Omondi, Mohammed Ali gave us a story that will shape national opinion for years to come. A Nairobi pastor’s ways of buying false testimonies were exposed. It started with a tip off from a sex worker, who claimed that Pastor Michael Njoroge of Fire Ministries located near City Cabanas in Embakasi, had approached him and offered him the odd job of faking an illness. The sex worker, identified as Esther Mwende, recounted how Pastor Njoroge first went for a ‘shot’, something not expected of a televangelist. Njoroge then gave Mwende the business proposal and she was very receptive.
Come Sunday, Njoroge identifies a crying woman with an deformed mouth; the same woman he had a shot with a few days earlier. The pastor is immediately informed by the ‘holy spirit’ that Mwende was punished by God for claiming that a certain pastor committed rape. He goes ahead and pronounces healing on Mwende. At the end of the day, Mwende pockets Sh 2,000. Come next Sunday, Mwende gives her testimony of how Pastor Njoroge healed him. Again, she is paid for that.
Somewhere along the road, the relationship between the pastor and the sex worker turned sore. That’s where Mohammed Ali came in. Mwende said she had delivered to the pastor a large order of over 20 fellow sex workers to give false testimonies.
The funny part is, even with all the supporting video evidence, Njorore did not lack guts to deny it. While giving his summon this Sunday, he rubbished claims that he was in hiding and accused enemies of Christ of fighting him. If that’s not funny, then this is; his congregation was actually behind him. NTV journalists and cameramen were repeatedly booed by the congregation while Njoroge was cheered on. One of the pastors went as far as telling Moha and Ferdinand that they would result to eating grass, to a loud applause from the congregation.
Njoroge at one point refused to let Moha place his microphones on the pulpit for good sound.
The conduct of Pastor Michael Njoroge has rekindled the age old doubt Kenyans have been having on many televangelist. Right from the days Bishop Margaret Wanjiru and Pastor Pius Muiru were the only pastors on TV, many people have been skeptical. One veteran televangelist, Apostle James Maina Ng’ang’a was just recently accused of being very drunk and disorderly. That was over and above his conduct during the NO campaigns, where he publicly bragged of driving a vehicle not even cabinet ministers can afford; referring to his sh 15 million white Range Rover Sport. Another pastor, whose church’s name is more recognizable than his, was recently in an embarrassing situation with his wife. Helicopter of Christ owner wants to divorce his wife but claims he can only afford to give her sh 5000 a month. This is despite his big fuel guzzlers waiting outside.
What Mohammed Ali and Ferdinand Omondi did was to confirm Kenya’s biggest suspicion.
© nairobiwire.com
Kibaki’s ‘Bodyguard’ To Resign And Join Politics. < Previous
Standard CEO, Paul Melly Sacked For Not Giving Mohammed Ali A Pay Rise. Next >
Recommended stories you may like: