Best Goal In The Last 20 Years. 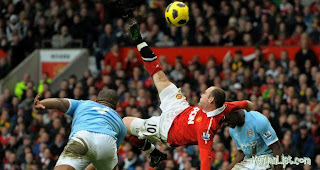 Wayne Rooney’s overhead goal against Manchester City has been voted as the best Premier League goal of the past 20 seasons.The bicycle kick beat 9 other goals including Thierry Henry’s flick and volley of 2000, which came at number 3. Dennis Bergkamp’s swivel and finish against Newcastle in 2002 came at number 2.
Speaking after winning, Rooney said, “I grew up watching the Premier League so to be voted the best goal in the history of the Premier League is a great feeling.
There’s so many good goals in that shortlist, goals that I watched in my living room as a kid: Alan Shearer’s goal, Paulo Di Canio’s, Tony Yeboah’s, David Beckham’s.
“To be competing with them and winning is a great honour for me and something I’m very proud of. I’d like to say a big thank you to all the fans that voted for me.”
Missed the goal? Here it is.
© nairobiwire.com
Juliani Still Dating Brenda Wairimu, Even After Denial. < Previous
Eliud Wabukala Gets Married. Next >
Recommended stories you may like: