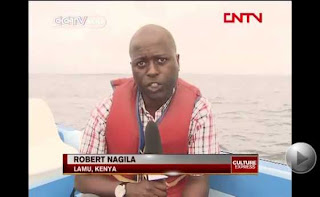 In perhaps their biggest loss this year, NTV has lost Robert Nagila to entrant CCTV. The self styled reporter has settled quite well at his new place and has already done a feature on a sunk Chinese ship. CCTV has poached the Kenyan media stations massively with high profile names like Beatrice Marshall and Terryanne Chebet heading for it. The exit of Robert Nagila, who is liked for his unique voice and captivating features will be a big blow to Nation Media Group. Robert Nagila was also a christened by the XYZ show where his name was twisted a little and style of reporting emulated. Worth noting is that his voice was done by Nick Odhiambo, who also did Keff Joinange’s.

Mystery Song Behind Citizen TV’s Advert. < Previous
Mourinho Best Paid Coach In The World. Next >
Recommended stories you may like: