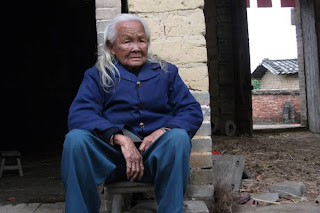 A 95 year old Chinese woman has been christened “zombie gran” after ‘coming back to life’ six days after her death. Li Xiufeng was found motionless and breathless by a neighbor a few days after she had tripped and suffered a head injury. She failed to wake up and it was assumed she had passed away in her sleep.

“No matter how hard I pushed her and called her name, she had no reactions.
“I felt something was wrong, so I tried her breath, and she has gone, but her body was still not cold.” said Mr Qingwang, the neighbor.

Mr Qingwang and his son made arrangements for the funeral. Traditionally, the coffin should remain in the house for several days for friends and family to pay their last respect. On February 19, her body was laid in the coffin but it was not nailed. The burial was supposed to be held on February 24.

One day before the funeral, Qingwang arrived at her house and found an empty coffin.
“We were so terrified, and immediately asked the neighbours to come for help,” he said.

After searching the house for a while, he found the granny sitting on a stool in her kitchen cooking.

“I slept for a long time. After waking up, I felt so hungry, and wanted to cook something to eat.
“I pushed the lid for a long time to climb out.” she said

According to medics, Mrs Xiufeng suffered an artificial death where a person has no breath but the body remains warm.