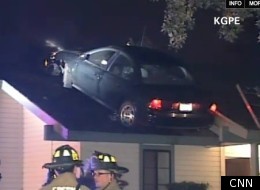 A man who had stolen a car in California was involved in an accident that propelled the car to a roof of a private residence.

Landlord Gary Brar thought it was all a joke when he got a call that there was a car on top of his roof. He only realized it was no joke when he went online and saw that it was a trending topic. The driver of the car fled the site but he was stupid enough to go to his ex girlfriend’s home where police caught up with him. A crane was used to bring down the car.

Has Mr Kajairo, The Music Comedy Been Taken Off Air < Previous
Have You Seen Justin Bieber Jesus Tattoo? Next >
Recommended stories you may like: