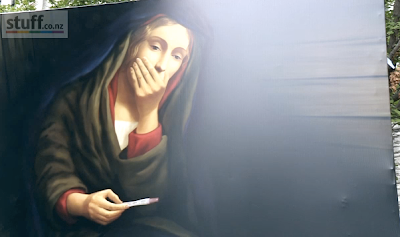 A New Zealand church has erected a billboard for the Christmas season showing virgin Mary holding the results of a pregnancy test, and you guessed it right, they are positive. Jesus is about to be born. Despite the billboard been labelled as offensive and inappropriate by many catholics, the church vicar continued to support it saying,
“Regardless of any premonition, that discovery would have been shocking. Mary was unmarried, young, and poor. This pregnancy would shape her future… Anything that provokes discussion about what the meaning of the Christian faith is, I mean that’s our goal, is to provoke people to think about meaning.”

The church also said that there is nothing controversial or shocking about the billboard, apart from the historical anachronism of Mary using a modern pregnancy test.

Mavado Not Coming To Kenya After All < Previous
World Oldest Dog Dies At Age 182 years. Next >
Recommended stories you may like: