A 76- year-old British woman went to a specialist complaining of weight loss and diarrhea and was diagnosed with severe diverticulosis, a condition that’s common in older people in which small pouches bulge out from the colon. A scan was done and doctors were surprised to see something linear in shape. On asking the woman about it, she remembered having swallowed a black felt-tip pen 25 years earlier. She had allegedly undergone a scan then and with inferior technology 25 years ago, nothing was detected. Of course doctors at that time did not believe her. 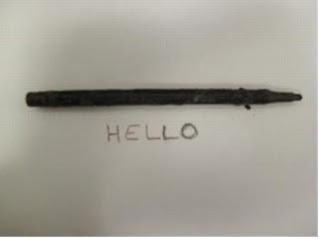 Over the years, the pen did not affect the woman in any way and even the diverticulosis was actually not because of it. The doctors decided to remove it anyway and what they saw amazed them. Though the pen had been corroded by the stomach acid over the years, the ink was intact and it could still write.

It has been said that a pen is greater than a sword and this incident just shows to what levels it can go.