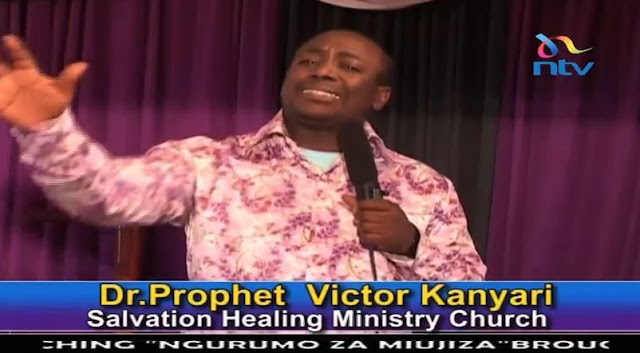 On Sunday, NTV had this story about Prophet Kanyari – the fake televangelist who demands money before performing his probably fake miracles.
Judging your financial might through the story you give him on his ‘prayer lines’, Kanyari demands amounts starting from Sh777.
He exploits people’s ignorance by using the Biblical number 7 in all his money demands.
Furthermore, he refuses to pray for you if you’re unable to raise that amount.

Yesterday, it emerged that ‘Prophet’ Kanyari is the son of another rogue pastor, ‘Prophetess’ Lucy Nduta.

Nduta was a few years back charged at a Nairobi Court for swindling unsuspecting Christians over 1 million shillings.
Nduta was offering a ‘miraculous’ Aids cure after the payment of an offering of between Sh200,000 and Sh400,000.
Patients who spoke to Nation newspaper then, recounted how they sold their property or took loans to pay ‘Prophetess’ Nduta.
A registration fee of Sh1000 was mandatory.

Two patients narrated how they paid hundreds of thousands, but continued being positive.

Lucy Nduta claimed that she received the gift of healing after she was “prophesied for and prayed for” by an unnamed “woman of God” in 1992.

“In this church alone I have more than 200 people who were HIV-positive, but whom I prayed for and changed their status,” she bragged in 2006.

Funny enough, Nduta and her son Kanyari have been using the same line to con people… “plant a seed”

In light of these latest revelation, we are tempted to ask, is fraud in the blood?

Loading...
PHOTOS – President Uhuru Visits The Great Wall of China < Previous
Kenya Has 8,400 Dollar Millionaires… Fourth in Africa Next >
Recommended stories you may like: