Was Uhuru’s Victory Speech a Copy – Paste of Obama’s Speeches? 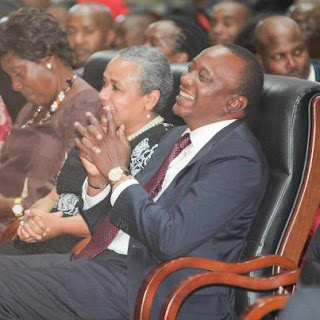 2 weeks ago, Uhuru Kenyatta was announced president – elect at the Bomas of Kenya. Immediately after receiving his certificate, he headed to Catholic University, where he gave his victory speech. The fact that it was aired live by international media, only served to put him in the international limelight. His speech was no ‘I have a dream’, but it received enough praise.
A few days later, it emerged that Julie Wang’ombe, a 22 year old daughter of NMG CEO Linus Gitahi, was actually the chief author of the speech.
For this she got featured in various media including this one.

Someone is however not happy about things as they are. A guy by the name Dikembe Disembe has written an open letter, accusing Julie and Uhuru of plagiarizing several Obama speeches. He also says that this has been the trend, and that Uhuru’s speech at TNA launch was another copy-paste. Dikembe however fails to give specifics.
Here’s the letter.

First, I’m still at pains to understand all the fuss about this 22 year-old writing a ‘speech’ to Uhuru Kenyatta. Is it because she’s 22 year old or ‘coz’ she’s the daughter to the CEO of Nation Media Group? But I digress.
Examining that speech, a student of contemporary US politics will tell you it was a full blast copy-paste of quite a number of President Obama’s speeches! Well, this is not the first time Uhuru is accused of using other people’s ideas without proper acknowledgements. At the party launch of TNA, the whole speech was another copy-paste!
You see, celeriac kids like Wang’ombe owe their place in society not to any known struggle with knowledge. From Hillcrest to Duke University, she’s been surrounded with the kind of opulence which makes you quote Kim Kardashian more often than, say, Tom Mboya or Wangari Maathai. Originality in writing is not gained from watching plasma Tv with a zillion DSTV channels. You do not become a wrestler by just watching Undertaker!
You know your speech is below par when the media is forced to replay it wholesomely during prime time news bulletin because they could not pick any ‘soundbites’. You know your speech is hollow in content when even the most loyal jubilee sycophant cannot remember a line or phrase two days after presentation. You know your speech is empty when you spend a whole paragraph acknowledging police officers and another long paragraph paying homage to the the media for doing their job! OH MY! Where did the talent go?
I must admit I did not watch Uhuru deliver the speech. I first found it revolting that 90% of that audience was composed of two tribes! When the MC of the day begun reading names; the kamaus and njugunas and Mainas and Njoroges were more than the combined tally of pokots living in Nairobi! It was an audience of ‘strongholds’. After Ruto’s cunning laugh and that ‘FP’ sideshow, I waited briefly to see some kids being paraded for the world. . .Kids we do not yet know their names, their schools or their friends. At least I know Shasha and Malia and Chelsea Clinton!
In Julie’s speech (not Uhuru’s), there exists a zillion redundancies which my former Chief Editor, Nyamweya Bw’omari would have pushed to the dustbin icon on this desktop long before he begins to look at context, value, style, signification. diction, syntax and semantic rules. This speech is only excusable because it was written by a 22 year old!
By all fairness, I’m not a UK admirer. I belong in that group of Kenyans who naturally do not like the president-elect; and, Mzalendo Kibunjia can do NOTHING about it. That doesn’t mean I do not respect him or will never agree with him as our president. It is a civil duty to honour the presidency but an extremely personal affair to ‘like’ the president.
Speeches like this one only serve to fuel speculation in the foreign press that Africa is indeed a dark continent intellectually.
A web search of Uhuru Kenyatta’s victory speech does not exist! In its place is Julie Wang’ombe’s speech; breaking all the canons in the practice of communication. Because we have mediocre journalists and a runaway press, I want to offer this free advice to ‘team Uhuru’: Let the president-elect own his future speeches regardless of who writes them! As a practitioner, which Julie Wang’ombe is not; your work is to contribute ideas, not to own them.
All American presidents have had speech-writers; you do not see the media give them more credit than the president who finally reads the speech. Again, where did true journalists go?
As I conclude, I’d rather Uhuru hires Cabu Gah or Bogonko Bosire or Denis Itumbi to spin for Jubilee than pick a shallow 22 year old with no political knowledge of Kenya or the world beyond the newspaper cuttings and downloads of other people’s speeches!