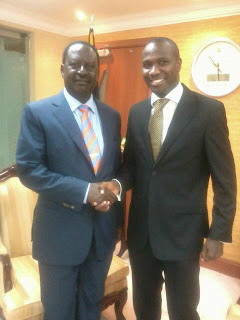 KTN news anchor James Smart, went on twitter rampage on Saturday, and his victim was none other than Musalia Mudavadi.
Unlike most of his timid colleagues, Smart decided to speak his mind on the politics of the day, and then we found out which side of the divide he lies on.

As a sign of things that would come on the fateful Saturday, the news anchor retweeted a tweet by Wanjiku Revolution on Friday night. It read:

The reaction by KU students this evening shows that we are on edge as a country. Silence does not signify peace. That’s why we need TRUTH.

The good journalist would then tweet and retweet several Pro-Cord, Pro-Petition statements.

(Retweeted)The petition is for us, for future generations. If at all there were mistakes or discrepancies they should never be repeated.

The assumption that CORD is only about Raila needs to stop. There are 5M Kenyans who voted for them. They also have rights.”

And then out of nowhere, Smart descended on Mudavadi.

KANU, NFK and UDF signing agreements with Jubilee allowing them to join government

Western Kenya doesn’t have leaders, it has opportunist, self centered individuals, political jokes with exaggerated sense of self importance

Uhuru should form an all inclusive government by all means, he should also drop folks who were dropped by the electorate, new blood!

(Retweeted) @jamessmat exactly thats also what i want to see coz if pple dropped them it means they were not performing why should they be picked again?

(Retweeted) @jamessmat u got a point #JAMES, 2 crown it ol they’re just greedy for power n want wants 2 remain relevant in politics when they are not

(Retweeted) Did I just read Musalia Mudavadi has signed a post-poll deal with #Jubilee. I hope the dark forces are not back and at it again.

Jesus—►”@makodingo: MaDVD is a broke, jobless 52-year old Kenyan male with no recognizable skill or talent – he has no option but to deal”

To all who were disagreeing with him, James had this to say.

Finally, I’m a Voter and a Kenyan just like you, i and 40 million Kenyan’s have an opinion you don’t have to agree with me, share yours.

Many journalists in Kenya tend to keep their political inclination to themselves, so this was a very bold move by James Smart. Unfortunately I’m not sure Mudavadi will ever agree to be in the same studio with Smart.

Loading...
Uhuru and Ruto Party All Night at Carnivore – Photos < Previous
Uhuru Kenyatta Shows America the Middle Finger: Dumps His iPhone For Samsung Galaxy S3 Next >
Recommended stories you may like: