The Story of John Harun Mwau

Considered one of Kenya’s wealthiest men, John Harun Mwau is a former police sharpshooter whose name has been associated with drug trafficking 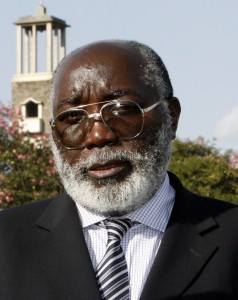 In 1992, a curious political outfit arrived on the scene. It was called the Party of Independent Candidates of Kenya (Pick), and it largely announced its presence through newspaper advertisements. Its leader was named, without any sense of irony, as The Boss. His real name: John Haroun Mwau.
The 64-year-old Kilome MP’s story is intriguing. He has the uncanny ability of running with hares and hunting with hounds. The former police officer, who is an acclaimed sharpshooter, has on different occasions been on the right side of the law, helping the country arrest criminals and fraudsters as anti-corruption agency boss. At the same time, he has been hounded by crime busters for his alleged involvement in drug trafficking, fraud and money laundering.
In 2004, a team of detectives raided Pepe Limited, his bonded warehouse in Athi River, after it was suspected the SH 6.4b cocaine haul seized in Malindi had found its way there. The anti-narcotics agencies had bust an international drug ring after seizing 701kg of Colombian Grade One cocaine in a raid where Italian and Kenyan suspects were arrested.

Although no incriminating evidence was found, claims of Mwau’s links with drug trafficking lingered. He was named, alongside other notorious global drug lords – including compatriot Naima Mohamed Nyakinyua, Mexicans Manuel Torres Felix and Gonzales Inzunza; Haji Lal Jan (Afghan) and Kamchybek Asanbekovich Kolbayev of Kyrgyzstan – for drug trafficking.
Mwau, who is the founding director of Kenya Anti Corruption Commission, recently claimed US President Barack Obama wanted him dead over his $750m (Sh6b) empire, after Obama named him one of the drug lords in the world.
Mwau’s immense wealth has baffled observers, with Michael Ranneberger once wondering how a mere assistant minister could have amassed such mind-boggling riches.

According to leaked communications between Ranneberger and his bosses in Washington, the envoy wrote “the list of corrupt individuals in Kenya would not be complete without Mwau.”
Ranneberger claimed Mwau is “widely believed to have amassed a huge fortune from trafficking drugs and other contraband through his Mombasa-based freight forwarding company, Pepe Ltd, which he used to help win his seat in Parliament.
Mwau is alleged to have started trafficking drugs while participating in international shooting contests representing the Kenya Police. His unfettered access, it is alleged, allowed easy transporting of narcotics.
“He is also believed to stand behind Charterhouse Bank, which was put under statutory management last year when credible evidence emerged that it was little more than a massive money laundering and tax evasion operation,” Wikileaks dossier went on.
In December 2010, speaking from the floor of the House, the late Internal Security minister George Saitoti named Mwau, together with fellow lawmakers William Kabogo (Juja), Mike Mbuvi (Makadara) and Ali Hassan Joho (Kisauni) as drug barons.

Saitoti incriminated the MPs after receiving a secret dossier from Ranneberger, which had also been distributed to the then director of Kenya Anti Corruption Commission, PLO Lumumba. According to Ranneberger, his country had enough evidence of Mwau and his colleagues’ involvement in drug trafficking.
Those mentioned however insisted they were innocent and demanded that the police conduct independent investigations.
When the Kenya Police finally carried out investigations, their report vindicated Mwau and, among other things, listed wealth as emanating from 12 of the companies he controlled as a director.
Among the companies Mwau was listed as director included Mwundo Ltd, Africa Centre for Hope Initiative Everywhere, Harun International Ltd, JH City Ltd, Preme Ltd, JN Records Ltd, Pepe Enterprises Ltd, Sheltown Ltd, Sports Champions Ltd, Tom Brown Ltd, Vitu Ltd and Kuston Kenya Ltd.
The probe also indicated that Mwau had interest in Nakumatt Limited, a leading supermarket chain in Kenya, and ruled out his alleged relation with Kabogo, insisting that he had no daughter, contrary to reports that he was the Juja MP’s father-in-law.

The Kilome MP was quite familiar with the investigations as he was a former police officer and trained fraud specialists. His brief data posted on the Government website indicate that Mwau was a certified fraud examiner.
The MP, who operates a website called Softkenya, is described on the site as one of the wealthiest Kenyans and explains that he believes wealth is a state of mind.
In one of the blogs, Mwau attributes his success in business to his days as a police sharpshooter where he says he honed his skill by paying attention to the tiniest detail and forcing himself to do things he was not comfortable with.
Despite being named in Parliament and American Congress as a international drug lord, Mwau has used Kenya’s legal system to defend his reputation.
In April this year, he succeeded in blocking former Ethics and Governance Permanent Secretary John Githongo from organising a public demonstration against him over his alleged involvement in drug trafficking. He had filed the application before Justice Pauline Nyamweya.

Kenyans were later treated to a melodrama when Mau claimed America wanted to assassinate him, and later displayed his bullet-riddled Range Rover vehicle to support his claims that there was an attempt by America to eliminate him as it had done with Al Qaeda leader, Osama bin Laden.
His claims were greeted with disbelief by the Police Commissioner Matthew Iteere who, upon inspecting the vehicle, announced that the shooting had been stage-managed as the bullet holes were consistent with a stationary object.
Iteere’s announcement cast doubt on reports by the MP’s driver and bodyguards that the vehicle had been attacked as they were driving along a city road. The police commissioner ordered the vehicle be scrutinised and towed to Central Police station for further investigations.
However, one of the experts who had been appointed to dust the car for evidence, dropped dead at Central Police Station moments after he had started dusting the car, prompting speculation that he had been poisoned. This was the last the public heard of the matter as no other police officer was willing to risk his life.

Mwau’s theatrics did not end there. The Kilome MP was driving himself on the morning of May 17, 2012 when he knocked down a pedestrian near Serena Hotel, who died on the spot. Initial police reports claimed the victim was at fault because he had been speaking on phone while crossing the road but could not produce the gadget he had been using.
More mystery unfolded after Mwau was said to have been unavailable to record a statement with the police because he was still reeling from shock. His vehicle, which had been removed from the scene of the accident, was also released soon after it was allegedly inspected, according to the Daily Nation.
Like his protégé Kabogo, Mwau has perfected the art of using the law to fight his political and legal battles, earning himself the label of one of the most litigious lawmakers in Kenya, owing to the number of cases he has filed against the State, civil societies and individuals.
Mwau’s intends to vie for the Makueni seat under Pick party.
By: Mavulture

Loading...
The 23 Commandments of Marriage < Previous
The 10 Richest Kenyans At The NSE Next >
Recommended stories you may like: