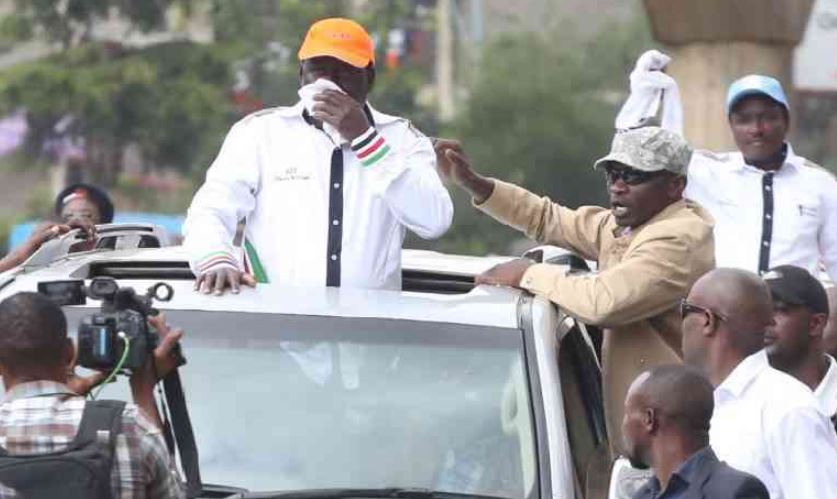 While parliament continues to listen to views from Kenyans on the conduct of the four IEBC commissioners, led by Cherera, who cast doubt over the August 9th Presidential results released by Chebukati, Raila has called for mass actions in some of the most populous regions in the country, including Nairobi and Kakamega to demonstrate against the ongoing hearings.

He has accused the government of witch hunt motivated by a sinister plan to capture the IEBC ahead of the 2027 elections, insinuating it is preparing to interfere with the polls the same way it allegedly bungled the 2022 elections.

Of course, the allegations that the Kenya Kwanza coalition rigged the elections were dismissed by the Koome-led Supreme Court due to lack of evidence.

In fact, the Supreme Court described the allegations as ‘hot air’ and reprimanded the coalition for sending it into a ‘wild goose chase’.

As it turned out, it was actually the four IEBC commissioners who unsuccessfully purposed to interfere with the elections in the hope that Raila would be announced the winner.

Regardless of the Supreme Court’s decision, the Raila-led coalition is going ahead with the calls for mass actions, asking Kenyans of good will to attend the rallies in the hope that it will stop the government from dismissing the four commissioners.

Of course, Kenyans should resist these calls because they have nothing to do with them; they are all about Raila and his plan to interfere with 2027 elections.

Kenyans have nothing to gain or lose if the commissioners stay or are removed from office.

The 2027 elections are five years away from now and Kenyans are facing more urgent problems at the moment.

First and foremost, although the rains are here, there are still some Kenyans who a facing food insecurity in the northern part of the country.

In fact, in September and October 2022, about 4.5 million Kenyans were facing hunger, with the government going as far as requesting Kenyans of goodwill to forego a percentage of their salaries to help raise funds to mitigate the disaster.

It is notable that even as Kenyans continue to face uncertainty with regards to food security and access, the opposition leader has not called for any mass actions to push the government to do more to address the situation.

Also, maize farmers are uncertain as to whether they will be able to sell their produce to the government if cabinet authorizes the importation the duty free maize that is currently docked at the port of Mombasa.

They have expressed concerns about the timing of the importation, stating their produce is already harvested and is drying in the stores, waiting to be taken to the national cereals and produce board.

Moses Kuria, the minister for trade, downplayed these concerns, urging them to find a way of selling their maize before the cabinet meeting set for Tuesday, which will authorize the maize importation into the country.

Consequently, members of parliament from Kenya’s food basket have threatened to impeach him if the maize is brought into the country.

Surprisingly for Raila, the plight of maize farmers from around the country, whose livelihood might be threatened by the maize importation is not grave enough to warrant a countrywide mass action as compared to the removal of the four commissioners.

Further, the Azimio coalition is not as concerned with the cabinet’s decision to authorize importation of genetically modified products into the country as it is with the removal of the Cherera four.

Currently, Kenyans have not yet understood the benefits and disadvantages of GMOs.

Whereas it is true they can be used to fight hunger, especially in the desperate situation the country is in, there are concerns they may be harmful to the environment.

Further, the government’s claim that Kenyans will be able to differentiate between GMOs and natural products and buy the products they want may not be entirely accurate.

It may be true for the people living in the three major cities – Nairobi, Mombasa, and Kisumu- but those in the rural areas or low income regions may struggle may not.

Further, they may be forced to purchase GMO products because they are normally cheaper as compared to natural ones, especially for those living in low income regions.

Therefore, the idea that the government is giving Kenyans choices is intentionally misleading.

Although the opposition leader has expressed these concerns in press conferences, he has not taken any intentional action to push the conversation around GMOs and their long-term effects on the environment and the human body.

Instead, he has chosen to call mass actions to protect the jobs of four commissioners whose integrity has been called into question.

Clearly, the call for mass action is not for the benefit of Kenyans but for Raila himself.

Although he has not personally expressed his intention to run for the presidency for the sixth time in 2027, he will most probably do it then because he has denied running in the past and actually ended up contending.

Therefore, it is likely that he wants the four commissioners to remain in office so that he can influence the election in some way in 2027.

As the Supreme Court ruled, the allegations the 2022 elections were marred with irregularities and the commissioners were attempting to prevent the manipulation of the presidential elections were works of fiction.

Clearly, it was Raila’s side that attempted to interfere with the elections after the coalition realized it had lost the election.

If that is the case, then it appears Raila wants the commissioners to remain in office so that he can interfere with the 2027 elections.

If he had no intentions to do that, he would be calling for their resignation because they clearly cannot be trusted to manage another election.

Therefore, the claims that he is asking for mass actions to protect the integrity of the 2027 polls is a mere camouflage to hide his intention to manipulate the 2027 electoral process.

Hence, Kenyans should resist his calls to use them to fulfill his sinister plans.