Kalonzo Hits Back at Ruto: Leave Me Alone. I’m Not on the Ballot, Raila is 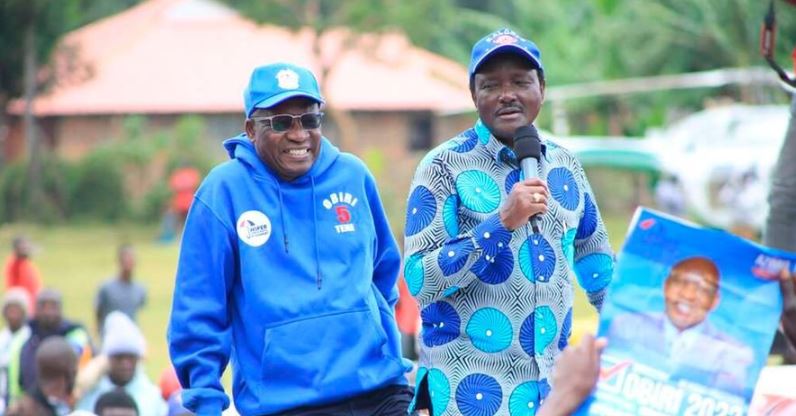 Wiper Party leader Kalonzo Musyoka has told off Deputy President William Ruto for dragging his name into his campaigns and for abusing President Uhuru Kenyatta.

Last week, during his two-day tour of Ukambani, Ruto hit out at Raila Odinga for failing to name Kalonzo Musyoka as his running mate.

“Kalonzo has stood with him (Raila) since 2013 and it was a mockery for Raila to subject Kalonzo to any form of an interview. Imagine someone asking Kalonzo, what’s your name, your education level, and in the end, you conclude he has failed. This was ridicule to this community, and I assure you if I win, I will absorb him into my government,” Ruto said.

“Now he (Raila) has promised to support Kalonzo in 2037 which is a lie. Years will have gone,” he added.

But speaking on Sunday in Kisii and Nyamira counties, Kalonzo told Ruto to leave him alone.

“He (Ruto) was telling Uhuru to leave him alone. He went to my Mwingi backyard and he was pretending to be my advocate. He claimed I had been oppressed by Odinga, do I look like an oppressed person?” Kalonzo posed.

The former Vice President said he is not running for Presidency and Ruto should focus his attention elsewhere.

“He claimed that I was forced into an interview by Raila and I failed. I did not send Ruto to those things. I am telling you Ruto, please, leave me alone. Hunt for your votes, I am not even on the ballot, what are you looking me for? Chase after Odinga, he will beat you.”

Kalonzo at the same time said it was shocking to see Ruto abusing his boss Uhuru Kenyatta.

“We have seen wonders. I have moved the world over and not seen a Deputy directly insulting his boss in such a manner, like Ruto is doing to Uhuru,” he said.

“You can hunt for votes without abusing Uhuru. If you search Uhuru’s name on the ballot, you won’t get it, but you will see that of Raila Odinga,” Kalonzo added.

Musyoka drummed up support for Raila and asked voters to turn out in huge numbers.

“Please vote for Raila Odinga. Come out in large numbers to vote for my candidate on August 9.”

Funny Tweets by Kenyans on Twitter for your Monday Blues < Previous
All The BEST PHOTOS As President Uhuru Launches Nairobi Expressway And Eastern Bypass Next >
Recommended stories you may like: