President Uhuru Kenyatta on Sunday commended winners and participants in the inaugural Nairobi City Marathon for making the event a great success.

The President said the marathon, dubbed Uhuru Classic, marks the beginning of putting the country’s capital city on the international map as a destination for one of the greatest marathons globally.

The President spoke at the Nyayo National Stadium in Nairobi County after presenting prizes to winners at the end of the inaugural marathon whose route mostly covered the newly constructed Nairobi Expressway.

The marathon attracted over 10,000 participants in the four categories of 42 km marathon, 21 Km half marathon, 10 Km race and 5 Km fun race in which First Lady Margaret Kenyatta participated.

At the same time, the Head of State announced that the Nairobi Expressway will be opened to the public for use on a trial basis this coming Saturday.

President Kenyatta pointed out that Kenya’s position as one of the best sporting destinations in the world is buoyed by its renowned athletics talents and the infrastructure the Government has put in place.

“Yesterday, we were in Kasarani stadium at the Kipchoge Keino Classic which attracted world and Olympic champions, again because of the infrastructure that we have developed.

“We are very hopeful and we are indeed well prepared that in 2025 we will have the pride and pleasure of hosting the first world athletics championship to be held on the African continent,” President Kenyatta said.

Apart from athletics, President Kenyatta expressed satisfaction that Kenya is increasingly becoming a destination for hosting other sports.

“And it is not just in athletics where we have begun to slowly attract the international attention. In a few weeks time, we will be hosting the second edition of the East African Safari Rally. Kenya is now on the map and has also been part of the European tour in the golf circuit. Our rugby players are also making us proud – both men and women,” the President said.

She thanked First Lady Margaret Kenyatta for her support, guidance and accepting to participate in the marathon adding that Kenyans admired her commitment and support to sports in the country.

“Your Excellency, I speak for many Kenyans when I say they all admire your fitness, your passion for sports and are always excited to watch you running. You have motivated many to start running,” said CS Amina.

On his part, the President of Athletics Kenya, Lt. General (Rtd) Jackson Tuwei, thanked President Kenyatta for supporting the marathon.

He described it as the highest paying marathon in Africa in which the first 20 winners of the 42 kilometres full marathon and the first six in the 21 kilometres Half Marathon will received prizes. 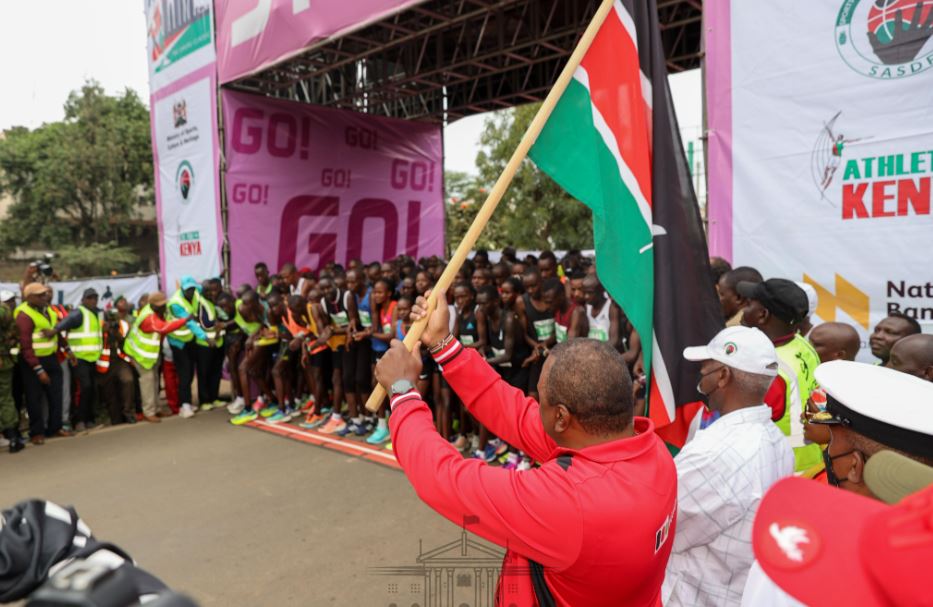 Prev1 of 29Next
Use your ← → (arrow) keys to browse
CRAZY – The Funny Memes Going Viral on Social Media < Previous
Bill Proposes Sh1 Million Penalty For Driving on Pavements Next >
Recommended stories you may like: