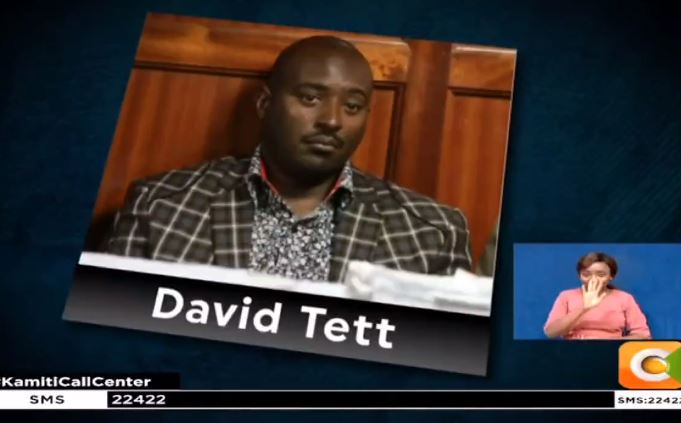 In a recent Citizen TV investigative piece, the use of illegal mobile phones by Kamiti Maximum Prison inmates to con Kenyans was highlighted.

In one particular clip, an inmate was seen and heard imitating a British national, complete with a very convincing accent. His name is David Tett, and it was quickly found out that he is the adopted son of former assistant minister Betty Tett.

David was initially sentenced to death in 2014, after he was found guilty of being part of a gang that violently robbed his foster father on September 6, 2011. Upon appeal, his sentence was reduced to 15 years.

“I have considered the evidence presented by the prosecution and l uphold the same. I now sentence the accused to 15 years imprisonment for each of the two counts of robbery with violence in accordance to the High Court directive,” Milimani Chief Magistrate Francis Andayi ruled in September 2021.

It has now emerged that Mr. Tett is currently a free man.

According to Commissioner General of Prisons, Brig (Rtd) John Warioba, Tett was released last year after the appeal ruling.

“We wish to clarify that one David Tett, a former prisoner, who was referred to in the clip aired on 18th April 2022 as a mastermind of the vice, was transferred from Kamiti Maximum Security Prison to Kamiti Medium Security Prison on 22nd July 2021 from where he was eventually released on 9th September 2021,” he said.

Typically, court rulings account for time served. Having been arrested in 2011, his 15 year sentence should have ended in 2026. However, it is likely that some days were shaved off his sentence in a completely legal process called remission. It is this same jargon that often leads Kenyans to mistakenly believe that a full 24 hour day in prison is counted as 2 days.

“Kamiti Maximum Security Prison has undertaken serious measures to enhance the security and safety of the inmates, officers and members of the public. The Kamiti of today is different from the one that was portrayed in the story of April 18, 2022.

“The department wishes to assure the general public of our commitment to ensuring that Correctional facilities live to their purpose of reforming offenders,” Brig Warioba continued in his statement.

If you missed that investigative piece by Lulu Hassan, watch it below.

The Trending Memes and Tweets in Nairobi This Thursday < Previous
Kivutha Kibwana: Kalonzo Wants Me Out of Azimio.. It’s Impossible To Work With Him Next >
Recommended stories you may like: